Market Daily: KSE100 gains 18.45 points as Sharif family is summoned by the court 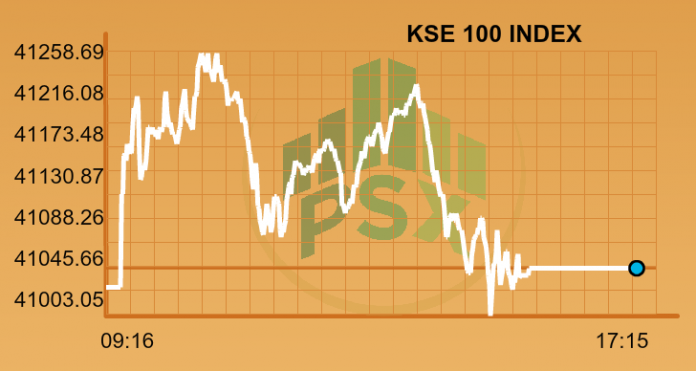 Volumes remained thin again as the former prime minister appeared before the National Accountability Bureau along with his daughter and son-in-law. Experts are suggesting that the exchange is likely to lose weight in the MSCI emerging market index in the upcoming review due to the recent downtrend.

The benchmark KSE 100 index has lost around 19 per cent since inclusion in June. Meanwhile, the MSCI EM Index recorded an appreciation of 12 per cent.

The KMI 30 index had a relatively better trading session. The index gathered 0.96 per cent to reach day’s high and closed with an appreciation of 0.22 per cent. The KSE All Share Index was up 70.35 points as 129 scripts advanced and 197 declined.

Sector-wise; E&P’s added 56 points amid rising crude prices, food added 30 points with around $ 1.0 million worth of NESTLE exchanging hands, auto assemblers added 28 points with PSMC (+5 per cent) & MTL (+2.8 per cent) gaining on the back of buoyant sales expectations; power eroded 24 points weighed down by HUBC and KEL (Rs 5.35, -2.2 per cent) which slipped to a 4 year low.

The market volumes were thin on par with the ongoing trend and a total of 106.53 million shares were exchanged during the day. Japan Power Generation Limited (JPGL -22.42 per cent) contributed 23 per cent to the total, 25.09 million. The script dropped on the second day after the Securities & Exchange Commission of Pakistan (SECP) decided to file a winding-up petition with the Lahore High Court (LHC) for the company.

Crude prices witnessed further gains overnight sparked by rising Saudi tensions. WTI rose $ 1.7 per barrel, shooting over the $ 57 mark while Brent was trading at $ 64 per barrel and Arab Light $ 61.7 per barrel. Resultantly, the KSE 100 index gained 232 points to an intraday high of 41,262 points with PPL surging past Rs 200 per share. However, reservation of a court verdict and subsequent media speculation that it may be announced at 3 pm around the end of the session triggered some profit-taking. Though the index ended the day little changed (+18 points), PPL managed to close at a 3 year high of Rs 199 per share.

The oil and gas exploration sector failed to post impressive returns as international crude oil prices were up to levels not seen since 2015. The sector topped up its cumulative market capitalization by only 0.80 per cent. Mari Petroleum Company Limited (MARI) increased 2.14 per cent, Pakistan Oilfields Limited (POL) was higher by 1.14 per cent, Pak Petroleum Limited (PPL) elevated 0.88 per cent and Oil and Gas Development Company Limited (OGDC) rose up by 0.35 per cent.

In a recent notice on PSX, Pakistan Oilfields Limited (POL +1.14 per cent) notified another hydrocarbon discovery. The block is situated in Zone 1 and the discovery will be priced under the Petroleum Policy 2012.