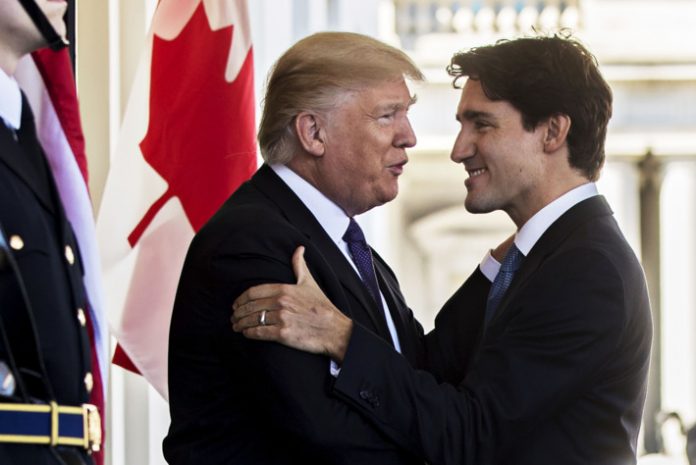 OTTAWA: Canada struck back at the Trump administration over U.S. steel and aluminium tariffs on Friday, vowing to impose punitive measures on C$16.6 billion ($12.63 billion) worth of American goods until Washington relents.

The announcement by Foreign Minister Chrystia Freeland marks a new low in ties between the neighbours and trading partners which have become increasingly strained since U.S. President Donald Trump took power in January 2017.

The Canadian tariffs will come into effect on July 1 and largely target U.S. steel and aluminium products, but also foodstuffs such as coffee, ketchup and whiskies, according to a list by the Department of Finance.

“We will not escalate and we will not back down,” Freeland told reporters at a Stelco Holdings Inc plant in the Ontario steel city of Hamilton.

Officials say the measures are designed in part to pressure Trump by focusing on goods from states where his political allies hold sway.

Canada’s Liberal party government said last month it would retaliate after Trump moved against steel and aluminium imports from Canada and other nations, citing security grounds.

“We are acting very much in sorrow, not in anger,” said Freeland, stressing the closeness of the overall relationship. Bilateral trade is worth around C$2 billion a day.

Freeland said she had already spoken to U.S. Trade Representative Robert Lighthizer six times this week and was prepared to meet at any time to tackle the issue.

Ottawa also unveiled an aid package for affected industries and workers worth up to C$2 billion, consisting mainly of up to C$1.7 billion in commercial financing and insurance for firms in the steel and aluminium sectors and related industries.

The Trump administration is studying whether to put tariffs on Canadian autos, which economists say would help plunge the economy into a recession. Freeland called the idea “absolutely absurd”.

The U.S. embassy in Ottawa said it had no immediate comment.

While opposition parties have so far largely backed Prime Minister Justin Trudeau for standing up to Trump, their support could be tested once the U.S. tariffs start to bite.

Trudeau, who usually attends celebrations in Ottawa on July 1 to mark the Canada Day holiday, will instead spend part of the weekend with families of steelworkers in the western province of Saskatchewan, Public Safety Minister Ralph Goodale said on Twitter. Goodale is from Saskatchewan, where Evraz plc has a major plant.

U.S. Commerce Secretary Wilbur Ross said earlier this month the tariffs were designed in part to stop cheap steel entering the United States via Canada and other countries.

Ottawa would take measures to stop the dumping of steel in the coming weeks once it had finished consulting stakeholders, said Canadian Innovation Minister Navdeep Bains, appearing at the same event as Freeland.

In Washington, the National Cattlemen’s Beef Association said the tariffs would hit $170 million worth of U.S. beef products.

“We believe that cooperation is a better path forward than escalation,” said Kent Bacus, the association’s director of international trade and market access.

U.S. officials have also linked the tariffs to slow progress in talks to modernize the North American Free Trade Agreement, which Trump says is a disaster and must be changed.

Freeland said she expected the negotiations would enter an intensive phase after a Mexican presidential election on July 1.