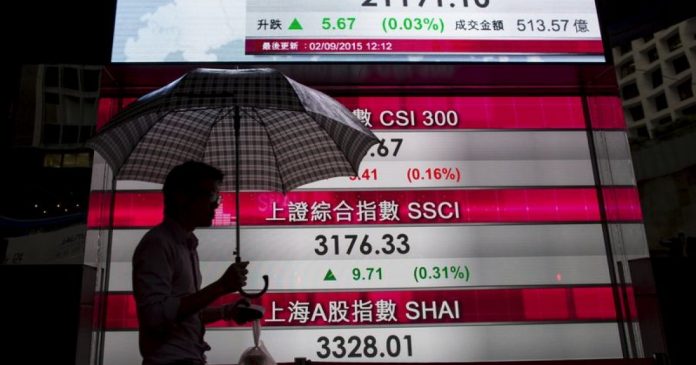 Shanghai led the retreat as mainland investors returned from a week-long break, during which time China was accused of using microchips in computer equipment sold in the US as part of a drive to steal technology secrets.

The losses in China also came despite a cut in the amount of cash the country’s commercial banks must keep in reserve, which its central bank says will pump more than $100 billion into financial markets.

Dealers were given a negative lead from Wall Street, where all three main indexes ended with sharp losses following news that unemployment had hit a 49-year low and wages saw healthy gains.

The report, which followed a slew of strong indicators on the world’s top economy, saw yields on benchmark 10-year Treasuries rise for the third straight day, hitting a fresh seven-year high with the Fed expected to stick to its rate hike drive.

Analysts said the sudden surge in interest rates had deepened worries about higher inflation and an uptick in costs for loans and mortgages.

The losses in New York seeped into Asia, where Shanghai sank 2.4 per cent and Hong Kong lost 0.8 per cent with property firms hit by expectations the city’s banks will lift mortgage rates again as they track a likely Fed hike.

Sydney retreated more than one per cent, Singapore eased 0.5 per cent, Seoul was 0.2 per cent lower and Taipei gave up 0.8 per cent.

Tokyo was closed for a public holiday.

Chinese dealers were playing catch-up with sharp losses last week, when Bloomberg reported that Beijing inserted microchips into equipment made in China for Amazon and Apple, and possibly for other companies and government agencies.

It claimed a unit of the People’s Liberation Army was involved in the operation that looked to steal tech secrets. Mainland tech firms tumbled across the board, while companies in Hong Kong and Taipei including Lenvo and Taiwan Semiconductor Manufacturing also extended Friday’s sharp losses.

The selling trumped news that the People’s Bank of China had lowered the required reserve ratio (RRR) as it looks to shore up the economy after a series of weak data, while it also battles a long-running trade row with the United States.

However, Stephen Innes, head of Asia-Pacific trading at OANDA, said, “It’s not too much of a stretch to assume markets should expect more policy easing measures and increased infrastructure spending. The RRR cut will help but the China economy will need more monetary policy persuasion to snap its current funk.”