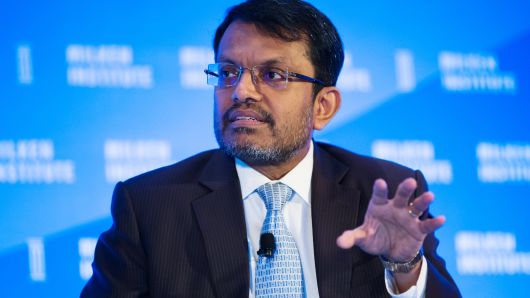 SINGAPORE: Concerted moves by countries to force companies to store data locally poses a risk to the growth of the digital economy, Singapore’s central bank chief said on Monday.

“We need more data connectivity and less data localisation. This is a serious risk,” Ravi Menon, managing director of the Monetary Authority of Singapore (MAS) told the opening session of the Singapore FinTech festival, which is expected to draw over 40,000 participants from 100 countries over three days.

“Data localisation measures are on the rise around the world. If data cannot cross borders, the digital economy cannot cross borders and we will be poorer for it,” Menon, sporting a red shirt and blue jeans, told a 3,500-strong crowd at a convention and exhibition centre in the city-state.

Singapore’s showcase fintech event brings together investors, regulators, entrepreneurs and technology executives who will traverse a myriad of topics including artificial intelligence in finance and cybersecurity.

Indian Prime Minister Narendra Modi is set to speak at the conference later this week.

Financial and technology companies have found themselves torn between protecting consumers’ privacy and cooperating with law enforcement.

“Not all data localisation is bad: there may be some legitimate concerns about national security. But a good part of data localisation that is happening in the world today is due to misguided notions of cyber security or data privacy or, worse still, old-fashioned protectionism,” said Menon.

A number of other countries in Asia and elsewhere are pursuing data localization laws as they seek greater control over the internet.

This month, Vietnam released a draft decree on guidelines to implement a cybersecurity law that global tech companies and rights groups have said could undermine development and stifle innovation.

And in October, global card payments giant Mastercard said it is storing its new Indian transaction data locally, as it starts to comply with a regulatory directive which U.S. companies unsuccessfully lobbied hard to dilute.

“We need common data standards across countries, so data can flow freely in an environment of trust and security, Menon said.

“In the digital economy of the future, data connectivity agreements among countries will become as important as today’s free trade agreements.”

Could cloud computing prove to be a digital goldmine for Pakistan?