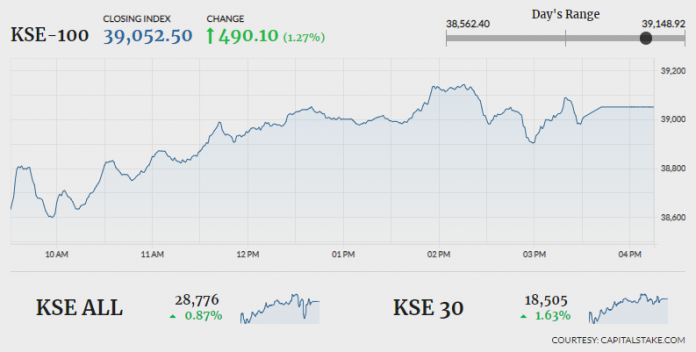 KARACHI: Optimistic sentiments prevailed at the Pakistan Stock Exchange (PSX) for the second consecutive session on Tuesday. Indices which opened positive continued to trade in green all day long.

According to news reports, Planning and Statistics Minister Makhdum Khusro Bakhtiar chaired a meeting to review the preparations for Pakistan’s 12th Five-Year Plan (2018-23). The Planning Ministry projected an annual economic growth rate at 7pc (previously 4.2pc) by the end of its five-year term.

Moreover, according to the latest data published by the Ministry of Planning, the government has decreased development expenditure significantly as it approved Rs225.4 billion in the first half of the current fiscal year, which is lower by 32pc as compared to the disbursements made in the same period last year.

Volumes surged from 157.10 million in the previous session to 166.79 million. Maintaining its position among the most traded scripts for second consecutive session, K-Electric Limited (KEL -1.11pc) topped the volume chart with 10.12 million shares exchanging hands, followed by TRG Pakistan Limited (TRG +4.88pc) and The Bank of Punjab (BOP +2.66pc). The scripts had traded 9.77 million and 8.33 million shares respectively.