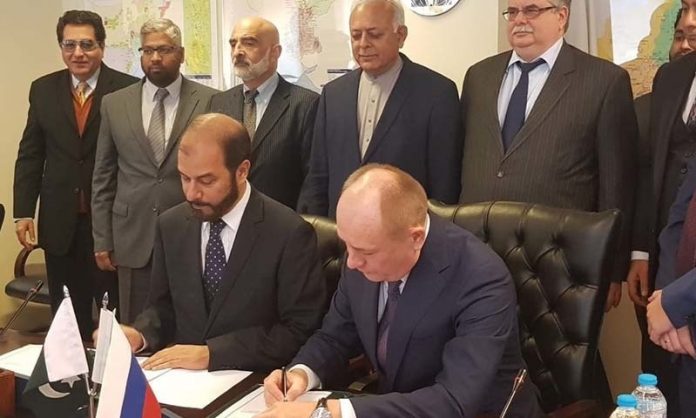 ISLAMABAD: Pakistan and Russian state-run entities on Wednesday signed an inter-corporate agreement to conduct the feasibility study of a $10 billion offshore pipeline project.

Under this project, Russian company Gazprom will conduct a feasibility study to build an offshore pipeline from Iran to Pakistan. The pipeline construction is expected to be completed in three to four years.

Inter-State Gas Systems Managing Director Mobeen Sauat and Gazprom board member Vitaly A Markelov signed the memorandum of understanding in this regard at the Petroleum Division.

As per the deal, Russia will export 500 million cubic feet per day (MMCFD) gas per day to meet the growing demand of Pakistan, following industrialisation under the China Pakistan Economic Corridor.

In the first phase, a feasibility study would be conducted by Gazprom at its own cost with no financial implications on Pakistan. Certain economic benefits such as transit fee would accrue to Pakistan if the project is implemented. Moreover, the subject project would bring Pakistan on the world map as a transit country for offshore gas pipelines. Besides, Pakistan would also have an option to offtake gas from the transit gas pipeline.

Russia holds huge gas deposits in Iran and has offered Pakistan and India gas exports by laying an offshore pipeline that would pass through Gwadar Port. Russia has been an important gas exporter to EU countries, and despite the US anger, the European bloc has continued to make imports to meet its domestic needs.

Russia receives gas from Turkmenistan and then exports it to EU states. It also manages gas deposits in Iran and is looking to gain a foothold in the Pakistani market.

According to the statement, Petroleum Division Minister Ghulam Sarwar Khan appreciated the expanding trajectory of bilateral relations between Russia and Pakistan. He welcomed Gazprom’s interest in the offshore gas pipeline project and termed it a “manifestation of multifaceted cooperation between both countries”.

“This project envisions transporting gas molecules from Gazprom’s sources in the Middle East onwards to Pakistan with a possibility in extending it further to South Asian countries,” he stated.

“The pipeline would follow an integrated approach including other ancillary projects such as underground gas storage, desalination and other power projects. Pakistan will import some 500 million to 1 billion cubic feet of gas from Russia daily, which would be transported via sea link,” the agreement stipulates.

The Russian side thanked their Pakistani counterparts for the facilitation being extended in preparing necessary groundwork for the project and renewed their commitment to deepening energy cooperation between both sectors. The Russian side invited the minister to Russia at mutually convenient dates.