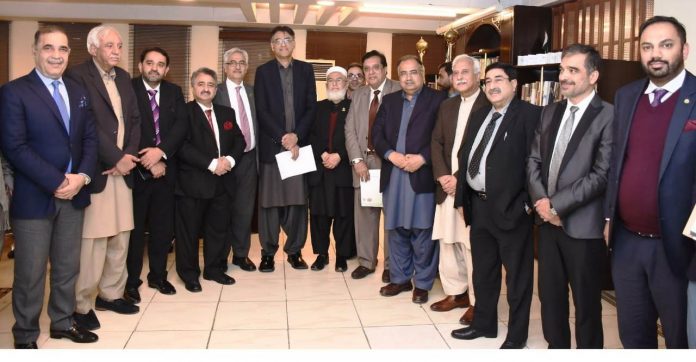 LAHORE: Lahore Chamber of Commerce and Industry President Almas Hyder, on behalf of the business community, presented a set of joint proposals regarding Federal Budget 2019-20 to Finance Minister Asad Umar.

The business community had chalked out the proposals, which ranged from tariff rationalization, refunds, financing to industry, industrial expansion, free trade agreements, ease of doing business and taxation system, after holding various brainstorming and consultative sessions between all the chambers of commerce in the country.

The LCCI president said that the private sector of the country wants to supplement the government’s efforts aimed at economic revival of the country. He said that joint proposals would help make budget document business-friendly, which would ultimately result in robust export-led growth.

According to joint proposals presented to the finance minister, the chambers proposed that customs duties on all raw materials should be low or zero. The government must eliminate regulatory duties and additional customs duty on raw materials so that the local industry could compete with the smuggled items and mitigate the effect of low tariff free trade agreements.

It was proposed that the rate of duties for trade and industry must be the same so that small and medium enterprises, who procure from trade, should have a level playing field. They said customs duties on intermediary products should be reduced so that the local industry could import quality materials, components and machinery from around the world.

The chambers noted that non-payment of refunds was drying out liquidity from the market. They proposed that payments through promissory notes should be extended to all sectors including five zero-rated sectors. “Refunds should be issued automatically without application, or pre-audit, within 60 days as per rules,” they added.

The business chambers urged the government to reduce the mark-up rate as it has made borrowing expensive. “The benefits of tax holiday should not only be for new projects but also for expansions.”

They said that the provincial governments should re-zone areas in and around urban centers, both for industrial and commercial use, to help entrepreneurs invest in greenfield and other projects. Foreign investment should only be allowed as a joint venture or as a public-listed company so that local investors could also benefit, they added.

They said that there should be one tax collection authority for both federal and provincial taxes. They added that audits should be risk-based with one month prior notice rather than random audits. “There should be a three-year tax holiday for the newly registered companies, especially for SMEs.”

They suggested that exemption from sales tax on imported plant and machinery for greenfield projects should also be granted to brownfield projects. “No tax exemption should be given on imports if the equipment, machine or part is locally available. Fixed tax system should be introduced at the SME level to enhance the tax base.”

The chambers said that there should be an exemption from audit for taxpayers who deposit 20pc or more tax over the last year. The tax exemption certificates to commercial importers and manufacturers should be issued automatically if their withheld tax is equal to last year’s tax.

Federal Finance Minister Asad Umar, while agreeing with the proposals, said that these would be made part of the Federal Budget 2019-20. On demand of the LCCI president, the finance minister asked Minister of State for Revenue Hammad Azhar to ensure early payment of refunds up to Rs5 million. He also agreed with the suggestion of automatic payment of refunds within 60 days.

Umar said that provision of facilities to the business community was among the top priorities of the government, as “private sector would be leading the economy in near future”.