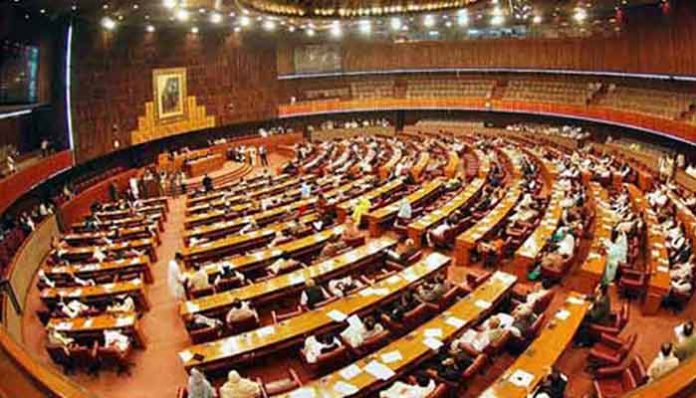 –Lawmakers tear up copies of bill, boycott session as NA passes the finance bill rejecting all amendments proposed by Opp

–Bilawal calls out PTI over anti-poor budget, says expenditure ‘up by Rs 439bn’ in spite of austerity claims

ISLAMABAD: The Pakistan Tehreek-e-Insaf (PTI) government bulldozed the Finance Supplementary (Second Amendment) Bill 2019 through the National Assembly on Thursday as the opposition parties walked out of the House over the NA speaker’s reported refusal to allow a debate on the mini-budget.

It is the second mini-budget by the government in a single financial year. Last month, the 55 proposed amendments in the bill were laid out for discussion by Minister of State for Parliamentary Affairs Ali Mohammad Khan on behalf of Finance Minister Asad Umar in the Lower House.

In his address, Pakistan People’s Party (PPP) Chairman PPP Chairman Bilawal Bhutto-Zardari thanked Speaker Asad Qaiser for allowing the debate on the finance bill, hoping the discussion would be “complete and proper”.

The PPP chief said: “It would have been an unprecedented move not to hold a debate on the budget. And while we thank you for that I must reiterate, on the floor of the House, that it would be most appropriate if there was a complete and proper debate on the finance bill.”

Taking the government to task for presenting yet another mini-budget, he said how could it claim to be a business-friendly regime when taxes were revised thrice a year.

He criticised the bill, saying that the government has increased the masses’ miseries by increasing the price of medicines among other necessities.

He said the PTI government has no plan to pull the country out of the economic quagmire, claiming that the government made cuts in the housing and education sectors to facilitate the rich segments of the society.

Taking a jibe at the government’s austerity policy, he said the opposition parties have been given sermons on austerity, but the current government expenditure “is up by Rs 439 billion”.

Jamiat Ulema-e-Islam (JUI-F) MNA Maulana Asad Mehmood concurred, arguing that the finance bill should be debated in the NA for three days prior to approval.

In spite of the protests by the Opp, the speaker started the process of passing the finance bill amid commotion by the opposition lawmakers. They lawmakers from opposition benches also tore up copies of the bill.

In a dubious first, Maghrib prayers were also offered on the floor of the National Assembly, led by JUI-F’s Maulana Mehmood, in a bid to obstruct the parliamentary proceedings.

PML-N’s Khawaja Asif and Ahsan Iqbal also took part in the prayers. The speaker was forced to adjourn proceedings for ten minutes to avoid further confrontation. Opposition members then walked out as the assembly returned from recess.

Criticising the government for rushing the bill through the House, opposition leader Ahsan Iqbal said the government got the bill passed within few hours when it had stipulated three days for the debate on the finance bill.

He chided the government for not allowing the opposition leaders to give their two cents on the bill and termed its conduct a dark chapter in the parliamentary history of the country as well as an affront to democracy.

Finance Minister Asad Umar termed the bill an “incentive package”. In his winding up speech, he stated that the bill was not aimed at revenue mobilisation bill, but an incentive package for industry, trade and business.”

He said the PTI government welcomes the proposal made by leader of the opposition that all the political parties should sign charter of the economy.

He accused the opposition for ‘political point-scoring’ rather than any “concrete suggestions how government should do to deal with the economic crisis”.

During his address, he said the PML-N left the country in a very poor shape economically as it borrowed money to pay debts while responding to criticism on the government borrowing [from friendly countries and possibly the IMF]

He said inflation during PTI’s six months was at 3 per cent as opposed to 10 per cent and 10.9 per cent during the first six months of Pakistan people’s Party and Pakistan Muslim League-Nawaz governments, respectively.

He claimed GDP growth in the first year of the current government would be higher than PML-N average growth of 4.5pc.

The finance minister said that the foreign direct investment was nothing during the tenure of the previous government if the China-Pakistan Economic Corridor (CPEC) inflows were excluded.

He further stated that projects lending was suspended by the World Bank (WB) during the tenure of previous government due to decline in foreign inflows below the required level of covering two and half months import bill.

The minister said that the former government increased the external debt from $61 billion to $96 billion during the five-year tenure and added $34 billion to the debt.

He said stated bank quarterly report cited by Ahsan Iqbal was for the period of caretaker and PML-N administration, not for the PTI tenure.

The lower house proceeding started under the chair of Speaker Asad Qaisar. Minister for Finance, revenue and Economic Affairs division presented the finance supplementary (second amendment) bill, 2019. The house passed the provisions of supplementary bill one by one.

Amendments in Customs Act, 1969: In order to provide an additional incentive, import of plant and machinery by green field industrial undertaking has been exempted from customs duty.

In order to provide further incentive to the industrial undertakings set up in the Special Economic Zones, import of firefighting equipment have also been exempted from customs duty and advance income tax.

The outstanding sales tax refunds shall be liquidated through issuance of Promissory Notes or bonds by the FBR. It has now been decided that the proposed bonds shall be issued by FBR Refund Settlement Company (Pvt) Limited.

Amendments in the Income Tax Ordinance, 2001:

In order to address the concerns of local manufacturers of motor vehicles, government has allowed non-filers to purchase locally manufactured vehicles irrespective of engine capacity.

Incentives were proposed through Finance Supplementary (Second Amendment) Bill, 2019 for Banks on advancing loans for agriculture, low cost housing and micro, small and medium enterprises. It has been proposed to further streamline these incentives.

Government has exempted such dividend derived by a company if the company avails group relief according to the proportion of shareholding of the company.

Amendments in the Federal Excise Act, 2005:

In the Finance Supplementary (Second Amendment) Bill, 2019 10% federal excise duty was proposed for locally manufactured motor vehicles of engine capacity of 1800 cc and above.

However, in order to address the concerns of local manufacturers of motor vehicles, the proposed engine capacity is proposed to be revised to 1700cc.