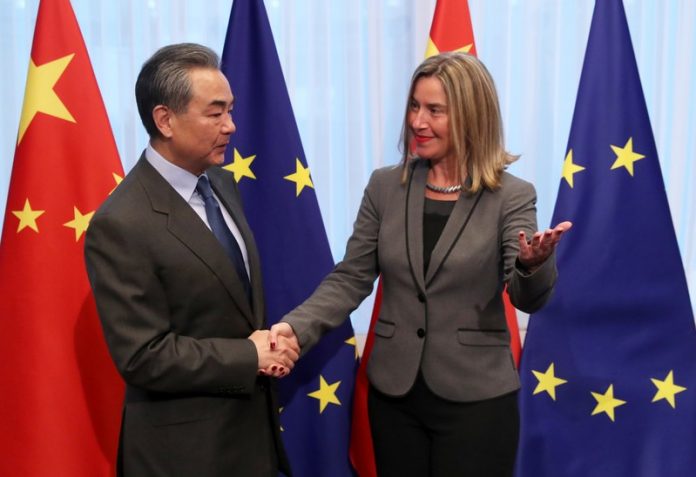 BRUSSELS: China dismissed US security warnings against its telecoms equipment maker Huawei as groundless and “abnormal” on Monday, as the Chinese government’s top diplomat went to Brussels to cool growing European frustration over trade.

In a veiled reference to Huawei Technologies Co, which the United States says could spy on the West, Chinese State Councillor Wang Yi told Washington to stop its attempts to “bring down” the company.

“What we oppose are groundless accusations for political purposes and attempts to bring down a foreign company,” Wang told a news conference, although he did not name Huawei, which is seeking to sell the next generation of mobile technology in Europe, its top market outside China.

“We think such practices are abnormal, immoral and have no support,” he said after a meeting with EU foreign policy chief Federica Mogherini and hours before a lunch with EU foreign ministers in Brussels.

While eager to talk up “win-win” cooperation with the European Union, the world’s biggest trading bloc, Wang began a day of talks against a backdrop of intense EU diplomacy. The bloc is seeking to translate a new wariness about China into a more defensive EU policy, diplomats and officials say.

EU leaders will discuss China at a summit on Thursday for the first time in many years, part of a flurry of high-level meetings as President Xi Jinping travels to Italy and France from this week and the bloc holds a summit with China in April.

“China is becoming really expansionist and have to stick to the rules … we are competing,” Lithuania’s Foreign Minister Linas Linkevicius told reporters before the lunch with Wang.

In a draft statement declaration for the April 6 EU-China summit in Brussels, seen by Reuters, the bloc is seeking to set deadlines for Beijing to open up its economy.

Last week in a shift in tone, the European Commission, the EU executive, described China as a “systemic rival” and called on the bloc to be more assertive after years of welcoming Chinese investment virtually unhindered.

Wang acknowledged the change in mood in his public remarks, saying competition between China and the European Union “may be inevitable”, although both he and Mogherini continued to refer to a strategic partnership between them.

Highlighting what the EU says is China’s refusal to allow the kind of unfettered foreign investment access that Chinese companies enjoy in Europe, the bloc’s trade deficit with China increased in January, according to EU data on Monday.

The EU deficit in goods trade with China widened slightly to 21.4 billion euros ($24.28 billion), from 20.8 billion euros a year earlier, according to Eurostat.

In the April 9 EU-China summit draft joint communique, the European Union will seek Beijing’s agreement for deadlines to open up China’s economy, trying to coax it into making good on promises to deepen trade ties.

China and the EU will “agree by summer 2019 on a set of priority market access barriers and requirements facing their operators”, according to a six-page joint communique drafted by the EU, which still requires Chinese approval.

The draft statement, dated March 8, said the two trading blocs would set “deadlines for their swift removal by the next EU-China summit 2020 at the latest”.

The statement, which is likely to change, also sets 2020 as the goal for a special treaty to increase investment flows that has been under negotiation for almost a decade.

A surge of Chinese takeovers in critical sectors in Europe and an impression in Brussels that Beijing has not kept its promise to stand up for free trade and globalization have given the April meeting new urgency, diplomats said.