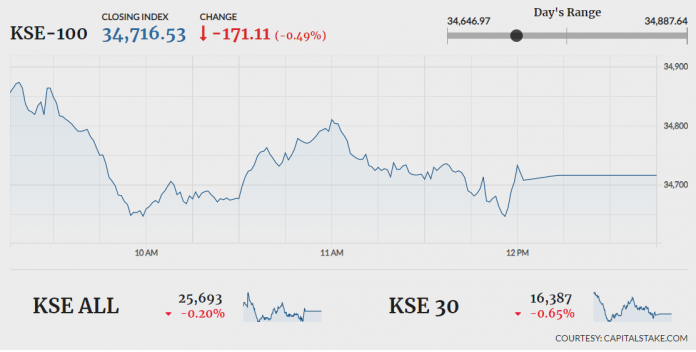 KARACHI: The Pakistan Stock Exchange (PSX) continued with its downward trend on Friday, as indices kept shedding gains amid thin turnover. Putting an end to their six-day buying pattern, foreign investors closed the previous session as net sellers of $3.62 million.

On the economic front, foreign exchange reserves held by the central bank increased by 2.03pc on a weekly basis and stood at $8.98 billion. The reserves had previously fallen below the $7 billion mark.

According to media reports, Pakistan’s economic growth slowed down to 3.3pc (lowest in nine years), failing to meet its growth target of 6.2pc. Currency devaluation and slow rate of economic growth caused the size of the economy to drop from $313 billion (at the end of the previous government’s tenure) to around $280 billion.

Moreover, media sources have revealed that Pakistan has agreed to most of the pre-conditions laid down by the International Monetary Fund during their recent meetings. Experts believe that an official announcement during market hours could have galvanized market bulls and brought back value hunters as the 100 Index, which traded in a tight range after posting initial losses.

“News flow regarding an agreement with IMF over the weekend can bring back market bulls and lift the 100 Index, as we expect value hunters to rush in and initiate short squeezes,” they added.