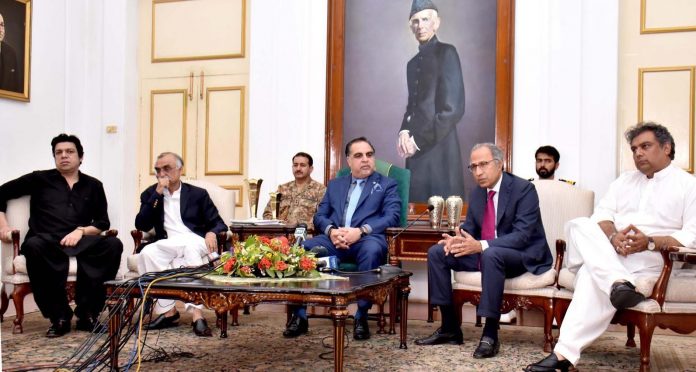 KARACHI: The government had no other option but to take few “important and tough decisions” to improve the economy after Pakistan’s foreign exchange reserves fell below $10 billion, said Prime Minister’s Adviser on Finance Abdul Hafeez Shaikh on Thursday.

Addressing a press conference, the newly-inducted finance adviser said the government’s decision to strike a deal with the International Monetary Fund (IMF) was also a part of the difficult decisions, taken to rescue the economy.

The adviser said through this agreement Pakistan will get six billion dollars on low interest rate from the IMF while we would also get two to three billion dollars from the World Bank and Asian Development Bank.

“The economic growth is meagre compared to inflation,” he admitted, adding that the government was trying to increase employment opportunities and wages for the employed class.

Talking about the impending budget announcement, he said: “The budget has been made bearing in mind the difficulties being faced by the people and the government would try to put the least amount of burden in terms of taxation [on poor] as well as curb expenditure.”

The finance adviser said that the government would allocate around Rs 800 billion for the development programmes in the next budget while the allocation for social security program will be increased to Rs 180 billion which is Rs 100 billion at present.

“No new taxes worth mentioning are being added, the federal budget will be announced by June’s second week,” said Sheikh.

Sheikh added that they were trying to make the country more viable to new business opportunities and investments, adding losses to the economy can be minimised by curbing expenditures. “People are well aware of our will and determination,” Sheikh opined.

He blamed previous governments for the precarious economic situation, saying when the Pakistan Tehreek-e-Insaf (PTI) came to power the country was reeling under the “debt of Rs 31,000 billion, including external debt of Rs 97 billion”.

Touching upon the appointment of Reza Baqir as the new the State Bank governor, the adviser said he was a well-recognised economist.

In a separate meeting with businessmen and traders in Karachi, he tried to take the nation into confidence over the imminent hike in power and gas tariffs, saying the hike won’t affect 40 per cent of the consumers.

“A user consuming 300 or less units will not be affected by any new taxes that might be imposed,” said the adviser in allusion to hike in power prices.

Federal Board of Revenue (FBR) Chairman Shabbar Zaidi and Sindh Governor Imran Ismail were also present on the occasion.

He said the government was looking to borrow $2-3 billion from the World Bank and Asian development bank in addition to the $6bn IMF bailout package. Hafeez Shaikh has said the country’s economy would be improved after implementation of the IMF programme.

On this occasion, FBR chief Zaidi said that the amnesty scheme was fully supported by the business community who declared it to be the in the best interest of the country.

Clarifying his stance on the KASB merger case, which also implicates him, the chairman claimed that he was not named in the case at all.