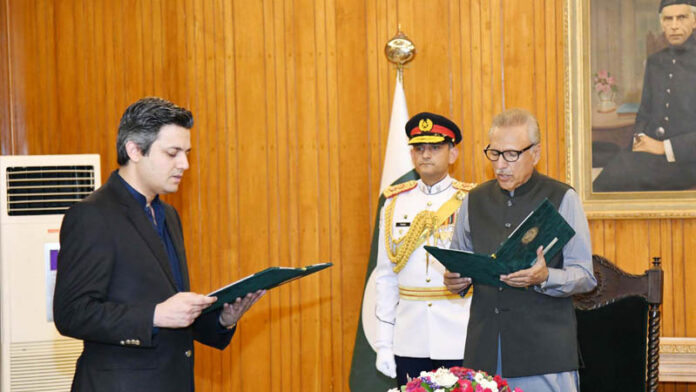 ISLAMABAD: A day after his appointment as the federal minister for Revenue Division, Hammad Azhar has been relieved of the portfolio, a notification issued by the Cabinet Division on Wednesday said.

Instead, Azhar has now been appointed the federal minister for Economic Affairs Division, a comparatively less important portfolio.

According to the notification, “Hammad Azhar will hold the portfolio of Economic Affairs Division, with immediate effect, as allocated by the prime minister in terms of rule 3(4) of the Rules of Business, 1973.”

It further read, “The prime minister has also approved that adviser to the PM Dr Abdul Hafeez Shaikh shall cease to hold the portfolio of Economic Affairs Division, with immediate effect.

On Tuesday, Azhar took oath as a federal minister for Revenue Division. President Arif Alvi had administered the oath at the President House.

Sources in the finance ministry revealed that Shaikh lodged a strong protest with the prime minister on Tuesday over withdrawal of the Revenue Division portfolio. He even hinted at resigning from his position.

The premier conceded to Shaikh’s demand, as he could not afford to change another finance minister within three months, said the sources.

It is pertinent to mention that PM Imran Khan had announced to elevate Azhar as federal minister due to his exceptionally good performance in the presentation of the budget and its defence in the National Assembly against a charged opposition.