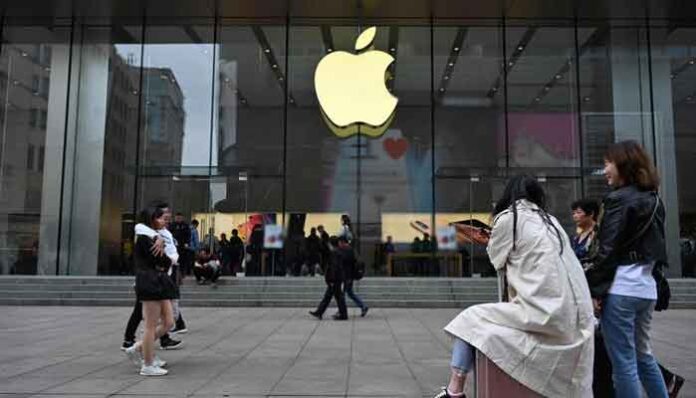 Apple lost more ground in the shrinking smartphone market last quarter, with a sales tracker saying the tech giant was pushed off the top-three seller list by a Chinese rival.

Apple fell to fourth place in global smartphone sales, shipping 35.3 million iPhones in the second quarter compared to the 36.2 million units shipped by Oppo, according to a report from IHS Markit this week.

“Apple continues to face challenges in terms of unit shipments — a trend that is unlikely to be fixed soon,” IHS smartphone research and analysis director Jusy Hong said in an online post.

While California-based Apple has been aggressively promoting iPhones, current-generation smartphones have “super-premium” prices while models a few years old are still costly compared to bargain Android-powered handsets, the analyst reasoned.

Other smartphone market trackers such as Counterpoint Research and International Data Corporation concluded that while iPhone shipments sank in the second quarter, Apple remained in third place what it came to global shipments.

Huawei — considered the world leader in superfast fifth-generation, or 5G, equipment and the world’s number two smartphone producer — has been blacklisted by US President Donald Trump amid suspicions it provides a backdoor for Chinese intelligence services. The company denies those charges.

“The effect of the ban did not translate into falling shipments during this quarter, which will not be the case in the future,” Counterpoint associate research director Tarun Pathak said in the firm’s market report.

“In the coming quarters, Huawei is likely to be aggressive in its home market and register some growth there, but it will not be enough to offset for the decline in its overseas shipments.”

The combined global smartphone market share of Chinese firms Huawei, Oppo, Vivo, Xiaomi and Realme reached a new high of 42pc in the second quarter, according to Counterpoint.

“These brands have been aggressively expanding outside China and achieving growth offsetting the saturation in their home market,” said Counterpoint research analyst Varun Mishra.

“Their strategies and product portfolios are more aligned to the local needs and preferences, which is one of their key strengths.”

Apple has been striving to wean itself off its reliance on iPhone sales with a focus on services, digital content and related gadgets.

In the just-ended quarter, Apple for the first time took in less than half its revenue from the iPhone, the longtime cash and profit driver for the company.

Apple managed to grow its overall revenues, albeit by a modest one percent, to $53.8 billion, even as iPhone revenues plunged nearly 12 percent in the April-June period.

The company delivered strong growth from digital content and services including Apply Pay and Apple Music, along with wearables and accessories like the Apple Watch and Air Pods.

Apple has stopped reporting iPhone unit sales, but chief executive Tim Cook said during an earnings call that there was a “strong customer response” to iPhone promotions and financing programs.

Apple saw its sales improve in the crucial China market, which included a double-digit increase in services revenue driven by strong growth in the App Store there, according to the company.

The sale of iPhones in that country was boosted by factors including pricing moves by Apple, and trade-in and financing programs, Cook said.