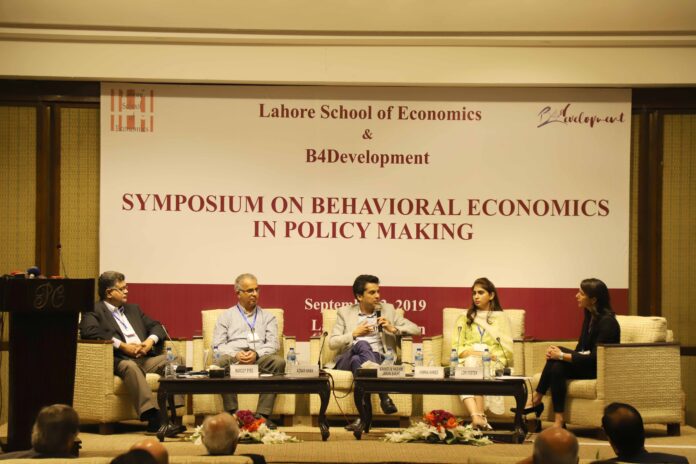 LAHORE: Punjab Finance Minister Makhdum Hashim Jawan Bakht said on Tuesday that the government has developed a new organogram for Punjab province to nudge the bureaucracy to be more economic-orientated.

The minister made these remarks at a symposium organised by the Lahore School of Economics (LSE) in collaboration with B4Development at a local hotel. The objective of the event was to summarise the experiences and insights from successful behavioural programmes from around the world on the role that behavioural economics can play in matters of compliance, public finance and accountability. The event was also held to engage key decision-makers from within the government with the aim of familiarising and promoting the use of behavioural interventions in the context of Pakistan.

The event comprised of two-panel discussions and a roundtable discussion that focused on the scope of behavioural sciences and its use as a policy tool to encourage individuals towards voluntary taxpaying and the government to ensure transparency and accountability.

The discussion was followed by a questions and answers session and closing remarks by the chair.

Ijaz Nabi noted that for its level of income, Pakistan has one of the highest rates of contribution to charity, but people don’t want to give money to the government because they don’t trust them. “A large part of Pakistan’s fiscal deficit is because people are not willing to pay taxes and that is because we don’t spend the money that we collect well,” he adds.

“If you combine the data from the Federal Bureau of Revenue (FBR) with our national ID card data on consumption, you can really go a long way in identifying people who should be in the tax net given their consumption patterns,”  IGC Country Director Ijaz Nabi noted.

The discussion was followed by a questions and answers session and closing remarks by the chair.

Punjab Additional Secretary Mujtaba Piracha told Profit: “Tax is not the only domain. Behavior is involved everywhere in public service. It’s about influencing behaviour on the consumer side as well as the government.”

One of the panelists, and Center for Economic Research in Pakistan (CERP) President and CEO Maroof Syed, on a question asked by Profit about how to quantify the change nudges can prospectively bring, said, “The project in which we are using this, we are seeing voluntary payments go up in. We want to quantify the increase in payments but the problem is that observing these measurements is very hard.”

“Nudges are very subtle and one thing we have tried to push back is why don’t we take it holistically. The reality is that if you pick up all the variables together, how would you know one variable did not affect another variable,” he says, adding that the instrument is subtle, but you have to tease out if the effect is because of the nudge or the incentive.

“To answer it in quantitative terms right now would be a bit difficult and we would be able to answer this question in 9-10 months,” he added.

The round table discussion focused on ‘Capacity Building in Behavioral Insights’, which was chaired by National School of Public Policy’s National Management College’s Dean Shujat Ali and moderated by prominent economist Sakib Sherani and co-moderated by Fadi Makki.