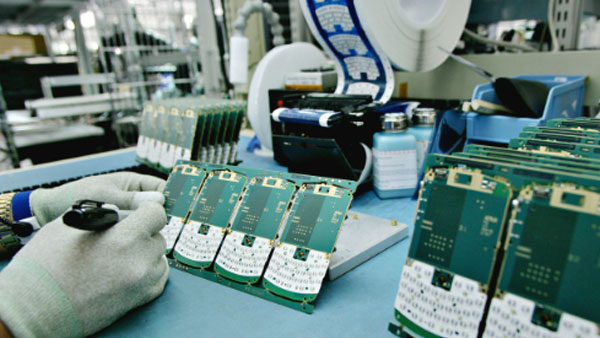 ISLAMABAD: In a positive development, the government has decided to facilitate the assembly and manufacturing of cellphones in the country.

The locally-assembled or manufactured mobile phones would replace the costly imported sets, as tariff structures for local assembling and manufacturing would be lowered, they said, adding that the manufacturing of smartphones will not only lower the import bill but will also create employment opportunities in the country.

As per the officials, consultations were held with the local representatives of multinational cellular phone set companies and their market players, including dealers, to formulate the draft policy.

Adviser to Prime Minister on Commerce Razak Dawood was briefed by the EDB on Tuesday. The adviser said that Pakistan’s large consumer base will be leverage to attract FDI in cell phone manufacturing. He directed the EDB to finalise the policy by next month.

The adviser was informed that the draft policy envisages incentives for local manufacturing/assembly of mobile devices, which will shift the focus from import of mobile sets to local assembly.

The EDB officials said that out of 26 approvals, 15 mobile sets assembly units are operating in the country, mainly in Karachi and central Punjab. However, a majority of them are only producing analogue sets whereas a limited number of smartphones are assembled in the country.

A senior EDB official said that the inflow of topline smartphones in the country had discouraged local assembling.

“Now after stern action by the Pakistan Telecommunication Authority, smuggling of mobile phones has stopped,” the official informed the meeting. “The high duty structures have also discouraged the import of smartphones.”

The draft policy envisages that the semi-knocked down (SKD) and completely knocked down (CKD) units should be encouraged in the country “but the traffic structures need to be rationalised”.

“The companies will opt for SKD, which is the assembly of sets with imported parts. In the later stages, manufacturing of parts will commence in the country under CKD,” the official said.

The EDB has suggested that duties on the parts may be reduced and certain benefits be offered to manufacturing of parts in the country so that the mobile sets assembled through SKD and CKD become cheaper than the mobile sets imported as completely build units (CBU).

The adviser noted that the Special Economic Zones (SEZs) were providing technical and financial support through various incentives by granting tax holidays and duty exemptions on parts which are used in mobile phone sets and other electronic goods.

EDB is the apex government body under Ministry of Industries & Production with the responsibility to strengthen engineering base in Pakistan.

It is pertinent to mention that the mobile phone industry has grown to become one of the biggest manufacturing sectors in the world. The Pakistani mobile phone market is estimated at 53 million units annually. This makes Pakistan one of the top 10 global markets for feature phones and smartphones. Sales value of mobile phones in Pakistan was estimated at Rs366 billion in 2019. This makes the industry bigger than automobile sector, with sales of Rs360 billion in 2018.

The mobile phone manufacturing industry is now moving out of China as governments around the world are incentivising local manufacturing through tariff measures that encourage the transition from CBU imports to SKD assembly followed by CKD assembly and ultimately targeting mobile phone exports from respective countries. Vietnam, India, Indonesia and Bangladesh are leading this transition since 2017 as a large number of local and global assemblers have sprung up, replacing CBU imports and creating an ecosystem for CKD manufacturing and localisation.