'Despite shortfall in targets, IMF officials satisfied with FBR's performance' 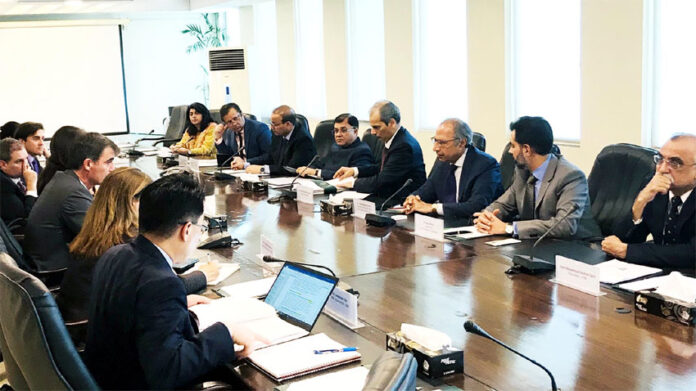 ISLAMABAD: Amid speculations of a strict International Monetary Fund (IMF) review of Pakistan’s loan programme, the finance ministry sees no hurdle in the first review of the $6-billion loan programme.

IMF officials are quite satisfied with the implementation status of the programme during the first quarter of this financial year ended September 2019, said a finance ministry official on Tuesday.

“Unlike the reviews of previous IMF programmes, the visiting mission is not going into every detail this time around. They [IMF officials] seem quite satisfied with the progress made by Federal Board of Revenue (FBR) despite the shortfall in set targets,” he stated. “There should be no issue in the release of the second loan tranche worth around $451 million.”

Pakistan is expecting the completion of the first review and the release of second tranche by December this year, subject to the approval of the IMF Executive Board.

Talking to media at the finance ministry on Tuesday, Advisor to Prime Minister on Finance and Revenue Abdul Hafeez Sheikh maintained that the IMF has acknowledged the performance of his economic team.

After meeting with the IMF mission team, led by its Pakistan, Middle East and Central Asia Mission Chief Ramirez Rigo Ernesto, Shaikh said owing to the bold steps taken by the government, the economic stability is now becoming visible.

“The containment of current and fiscal deficits and stabilisation of exchange rate are indicative of the government’s success in putting the economy on the track of long-term growth,” he said.

To a query, he said he would not increase burden on the already taxpayers, adding that efforts are being made to include tax avoiders into the tax net.

“Only an increase in Pakistan’s income tax figures can help the country repay its loans,” he said. “We are extending subsidy electricity and gas to the industry with an aim to increase our exports.”

Earlier, as per the officials, Hafeez Shaikh told the visiting IMF mission that Pakistan valued its cordial relationship with the IMF and that the relations were further strengthened during his recent visit to Washington where he held productive meetings with the senior IMF management.

He said Pakistan acknowledged the support and financial assistance extended by the IMF. “Prime Minister Imran is personally overseeing the progress made in various sectors of the economy.”

As per the finance ministry officials, Ramirez Rigo Ernesto appreciated the positive results being produced by the policies and strategies put in place by the government to remove imbalances in the economy.

He said volatility in the exchange rate has been reduced while successes have also been achieved in other areas, especially on the fiscal front, which indicates that the government is moving in the right direction.

He said the IMF mission is looking forward to having a meaningful and productive review with a forward-looking approach and a focus on the adjustments required till March, especially in the power sector and fundings from various bilateral and multilateral sources to boost Pakistan’s foreign exchange.

March 2, 2021
KARACHI: The Pak-UK Business Council of the Federation of Pakistan Chambers of Commerce and Industry (FPCCI) had signed a partnership agreement with Greater Manchester...