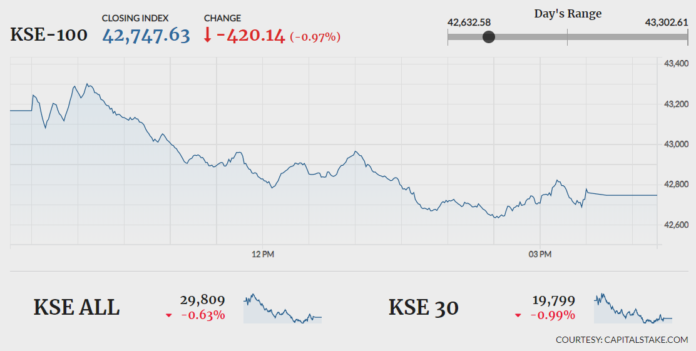 KARACHI: Pakistan Stock Exchange (PSX) witnessed a negative start to the trading week, as the indices remained in the red zone for almost the entire session on Monday, dragging the benchmark KSE-100 Index below the 43,000-mark.

On the economic front, a Pakistani delegation is currently on a three-day visit to Beijing where it would hold talks with Financial Action Task Force (FATF) on January 21. According to media reports, there is a possibility that a voting process would be conducted to determine Pakistan’s exit from the FATF ‘grey list’.

In a notification to the exchange, Azgard Nine Limited (ANL -1.82pc) announced that the company would issue right shares at par value to raise Rs365 million in order to pay off liabilities to its creditors.

Meanwhile, Hi-Tech Lubricants Limited (HTL +5.50pc) revealed that the company has finally started “marketing of petroleum products” through the operation of four franchised HTL fuel stations in cities of Jaranwala, Faisalabad, Jhang and Chiniot. As per the company, the number of fuel stations would soon be increased to 26 in Punjab.