Wells seeks ‘trade-based’ ties between Pakistan and US 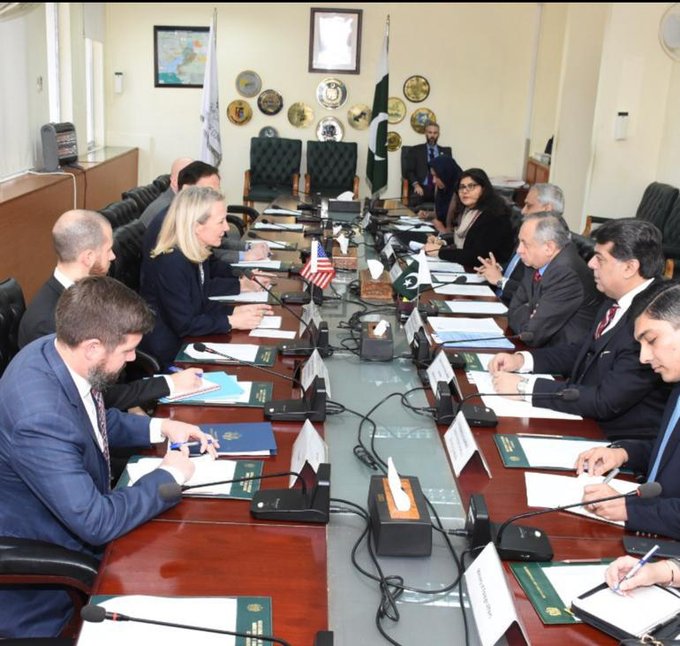 Acting US Assistant Secretary for South and Central Asia Alice Wells has that she was looking to take the relationship between Pakistan and the United States to a “trade based rather than an aid based cooperation.”

The remarks resonated with a longstanding desire of Pakistan, especially Prime Minister Imran Khan, who – during a visit to the US last year – had sought a “dignified relationship” with the US that is not constrained by the compulsions of aid.

Wells, who is currently on a four-day visit to Pakistan, made these remarks Monday evening at a reception which was attended by several retired generals, diplomats, and prominent journalists.

The senior US diplomat also appreciated Pakistan’s role in the ongoing peace talks in neighbouring Afghanistan and said that “Pakistan and United States have seen unprecedented cooperation in the context of Afghan peace talks.”

Wells’ visit to Islamabad comes immediately after Pakistan’s Foreign Minister Qureshi concluded his trip to the US where he interacted with senior United Nations and American officials in New York and Washington.

According to Arab News, the Afghan peace deal will be top of Wells’ agenda during her Pakistan tour.

Afghan Taliban have recently agreed to a reduction in violence, and Foreign Minister Shah Mehmood Qureshi last week had said that the announcement by the group was an essential step towards a peace agreement in Afghanistan.

In addition to the Aghan peace talks, Pakistan’s role in recent developments in the Middle East has positioned it as “an effective backdoor communication channel between Iran and the United States”.

Ambassador Wells arrived in Islamabad Sunday after a visit to India and Sri Lanka and spent a busy day meeting with senior officials in Islamabad. She called upon Special Advisor to the Prime Minister for Commerce Abdul Razak Dawood.

Dawood, after meeting with the US delegation led by Ambassador Wells, said that the United States is eager to increase trade ties with Pakistan and identified agriculture as a sector where immediate progress could be made.

Ambassador Wells also met with Interior Minister Ijaz Shah. Among other issues, both officials held talks about stopping illegal immigration to the United States, streamlining the verification of passports and traveling documents.

The visiting US delegation was also given a detailed briefing by officials at the Interior Ministry about the progress regarding the Financial Action Task Force (FATF).

During his last visit to the US, Foreign Minister Qureshi had urged the US to help it get off FATF’s grey list.

At a news briefing at the time, Quresh had said that Pakistan hoped the US would back its efforts to get it off the list at the FATF’s Beijing meeting in February.

“This meeting is very important for us as it leads to a plenary meeting in Paris in April where the world body will decide whether Pakistan remains on the list or is taken off,” he had said.