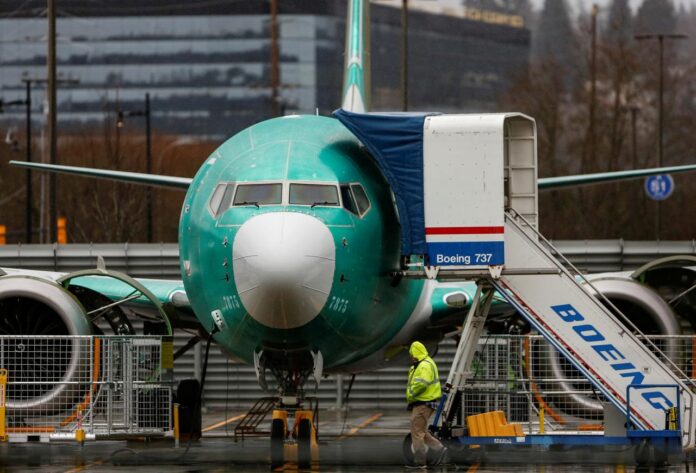 ILLINOIS: Boeing Co on Wednesday swung to its first annual loss since 1997 on mounting 737 MAX costs and indicated it would again cut production of its bigger 787 Dreamliner aircraft, currently its main source of cash.

Costs related to the global grounding of Boeing’s once fast-selling 737 MAX reached $14.6 billion in 2019 and the planemaker warned of another $4 billion in charges in 2020 due to the expense of freezing and slowly restarting the jets’ production.

Boeing, facing the biggest crisis in its history, had previously estimated an around $8 billion price tag for the MAX fallout.

The aircraft was grounded in March after two crashes that killed 346 people. Boeing has since frozen production of the aircraft as deliveries, the moment when the planemaker receives most of its cash, remain halted.

“We recognize we have a lot of work to do,” Boeing President and CEO David Calhoun said in a statement. His predecessor, Dennis Muilenburg, was ousted last year.

Boeing shares opened 3pc higher, as some analysts had expected an even larger charge for 737 MAX costs. The stock has lost about a quarter of its value since early March 2019.

“Boeing faces some considerable challenges in the near-term, but we expect the market to focus on the level of free cash flow that the company can generate in the early-2020s on a sustainable basis, once the MAX returns to service,” Redburn analyst Jeremy Bragg said.

The Chicago-based planemaker has been updating the 737 MAX flight control system and software to address issues believed to have played a role in both crashes.

The US Federal Aviation Administration has suggested that it could approve the MAX to fly again before mid-year, longer than Boeing had initially expected.

Calhoun told CNBC on Wednesday he believes the company can meet the certification timeline.

Analysts on average expected Boeing to post earnings per share of $1.47 in the quarter, though several had predicted a loss amid a wide range of forecasts due to uncertainties over the cost of the 737 MAX crisis.

The company also booked more charges on its military tanker and space programs.

Adding to Boeing’s pain, demand for its bigger and more profitable jet – the 787 Dreamliner – has waned in the face of the US-China trade war, prompting the company to cut production, hurting cash flow at a time when its debt is mounting.

Boeing, which is producing the 787 Dreamliner at 14 aircraft per month, said in October it expects to lower the production in late 2020 to 12 per month, amid a drought of orders from China.

The company now expects to further lower 787 Dreamliner production to 10 per month in early 2021.

The MAX charges include $8.3 billion to compensate airline customers that are canceling flights and scaling back growth plans in a hit to profits while their MAX jets remain grounded.

US airlines have taken the MAX off their schedules until early June and have said they need at least 30 days after FAA approval to prepare their jets and train pilots.