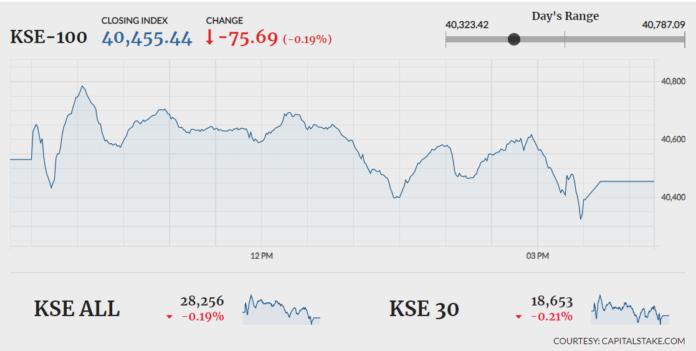 KARACHI: Investors of the Pakistan Stock Exchange (PSX) witnessed a jittery session on Thursday, as the indices kept changing directions throughout the day before closing slightly negative.

Foreign investors closed the preceding session (Wednesday) as net sellers, with a net outflow of $4.92 million. Major selling was witnessed in the banking ($1.47 million) and oil & gas exploration ($1.95 million) sectors.

On the economic front, remittances sent home by overseas Pakistanis surged by 9pc in January 2019 to $1,907 million as compared to the same period last year. Country-wise data showed that highest amounts were remitted from Saudi Arabia ($433 million), UAE ($395 million), USA ($335 million), UK ($299 million) and Malaysia ($124 million). On a cumulative basis, $13,302 million were remitted in the first seven months of FY20 as compared to $12,774 million in the last fiscal.

The overall market volumes inched up by 9.48pc from the previous session and were recorded at 197.44 million. Unity Foods Limited (UNITY +5.81pc), D G Khan Cement Company Limited (DGKC +4.52pc) and The Bank of Punjab (BOP -0.91pc) remained the volume leaders of the day. The scripts had exchanged 22.38 million, 18.25 million and 13.82 million shares, respectively.

Also, Nishat Power Limited (NPL +1.10pc) announced its financial performance for 2QFY19. The company reported an EPS of Rs3.27 as compared to Rs2.58 in 2QFY18. An interim cash dividend of Rs1.00 was also declared by NPL.