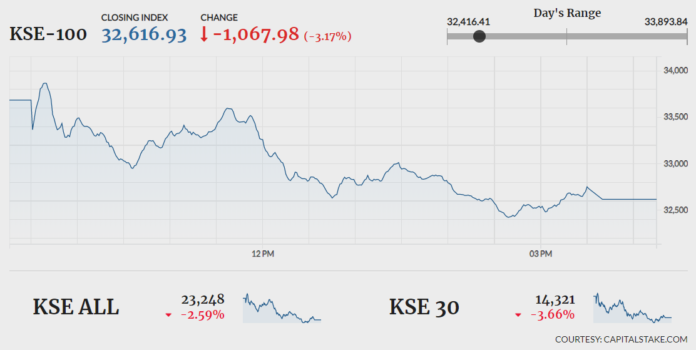 KARACHI: After registering its biggest decline in a decade yesterday, the Pakistan Stock Exchange (PSX) continued with its downward trajectory on Tuesday, with the KSE-100 Index sliding below the 33,000-mark.

Investors remained under selling pressure due to worsening of the situation caused by an increase in the number of coronavirus cases in Pakistan, analysts said, adding that investors also remained cautious ahead of the monetary policy announcement.

On the economic front, the country’s net Foreign Direct Investment (FDI) increased by 151pc to $289 million in February 2020 as compared to the same period last year. On a month-on-month basis, the FDI rose by 30pc. Highest investment was once again received from China, followed by Malta, UAE, Hong Kong and the Netherlands. For the third consecutive month, power sector managed to attract the most amount of investment.