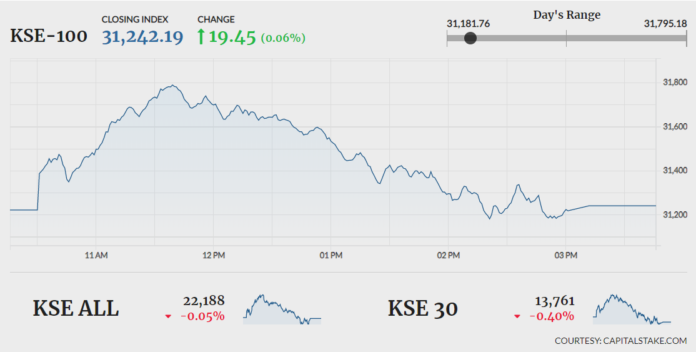 KARACHI: Investors at the Pakistan Stock Exchange (PSX) witnessed another volatile session on Wednesday, as the indices oscillated in both directions before closing flat.

“The market opened on a positive note primarily in reaction to the partial opening of various industries and sectors by the federal and provincial governments,” said an analyst at Arif Habib Limited. “However, as WTI Crude Oil price dropped over 4.5pc to 18-year low at $19.20 per barrel, exploration & production and oil & gas marketing companies crumbled from levels maintained earlier in the day.”

Among other developments that dented investors’ confidence, the International Monetary Fund (IMF) predicted that Pakistan’s real GDP will fall to 1.5pc in 2020 before recovering to 2pc next year. The Fund projected consumer price inflation to remain at 11.1pc in 2020, while unemployment rate is expected to rise to 5.10pc.

The global economy is also projected to contract sharply by 3pc in the current year due to COVID-19.

Meanwhile, the State Bank of Pakistan (PSX) has also revised down its projection for economic growth by half a percentage point to 3pc for the current year after infection cases started rising slowly in the second half of March.

In a notification to the exchange, Sazgar Engineering Works Limited (SAZEW -2.82pc) informed that it has partially resumed it’s the manufacturing of ‘tractor wheel rims’ following the government’s announcement of exemption from lockdown.