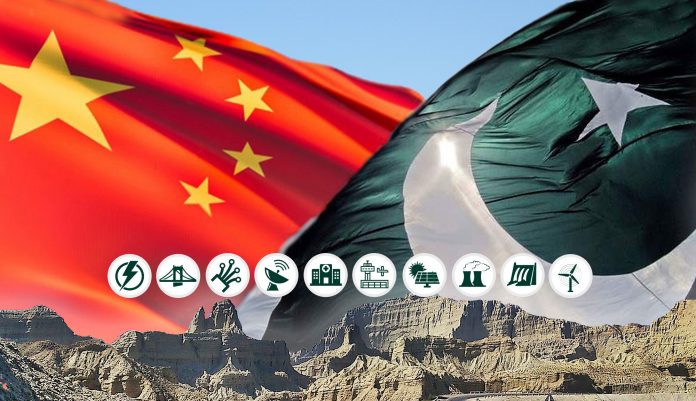 –Asad Umar lauds progress made on CPEC in FY20, says next phase will focus on agriculture, science & technology

ISLAMABAD: The Cabinet Committee on China Pakistan Economic Corridor (CPEC) on Thursday expressed satisfaction over the progress on CPEC projects.

The committee, which met with Minister for Planning, Development and Special Initiatives Asad Umar in the chair, had also in attendance ministers and secretaries from 10 ministries.

Special Assistant to the Prime Minister (SAPM) on Information and Broadcasting Lt Gen (r) Asim Saleem Bajwa briefed the committee about the progress of various CPEC projects being executed across the country.

Later, Asim Bajwa, who is also the Chairman of the CPEC Authority, said on Twitter that as per Prime Minister Imran Khan’s vision, the authority would ensure that CPEC’s dividends reach every Pakistani.

He said the officials from relevant ministries have reaffirmed their complete commitment to accelerating work on CPEC projects.

He said in the power sector, two projects with a capacity of 1,980MW were commissioned while groundbreaking of another was performed. “Similarly, the financial close of two projects was achieved and concession agreements of two hydel projects of 1,800MW capacity were signed.”

Moreover, he informed, two infrastructure projects were completed, with groundbreaking of another one, while the planning ministry also accorded approval for three other projects.

“Most importantly, the biggest CPEC project so far and the biggest rail project in the history of Pakistan, ML-1, got approval from the Executive Committee of the National Economic Council (ECNEC) to proceed further,” Asad Umar said.

The minister claimed that significant progress had been achieved in the development of Gwadar port’s infrastructure, which was the linchpin of CPEC. The achievements included the groundbreaking of Pak-China Hospital and a technical and vocational centre.

Phase-1 of a project to supply 5MGD water from Saur Dam to Gwadar city was also completed in FY20, he added.

Asad Umar mentioned that the groundbreaking of the first CPEC Special Economic Zone (SEZ) in Faisalabad had taken place in January this year, while significant progress was also made to set up SEZs in Dhabeji, Sindh and Rashakai, Khyber Pakhtunkhwa.

“As we move forward, the emphasis on industrial cooperation (with China) will increase.”

He said two areas of emphasis and priority in the next phase of CPEC would be agriculture, and science & technology. New joint working groups had been established for both the areas under the CPEC framework, he added.