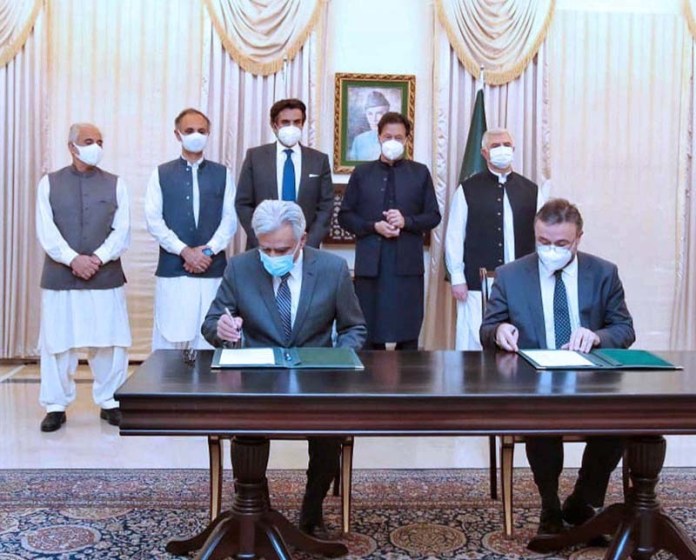 ISLAMABAD: Pakistan and the World Bank on Thursday signed two agreements related to renewable energy and hydropower projects, worth $1,150 million, in Khyber Pakhtunkhwa.

These include the $450 million ‘KP Hydropower & Renewable Energy Development Project’ and the $700 million Evacuation of Power from DASU Hydropower Project (Phase-I).

Under the second project, the National Transmission & Despatch Company (NTDC) will construct a 765kV double circuit transmission line from DASU Hydropower Project to Islamabad via Mansehra. The transmission line will be used to evacuate power from 2,160MW Dasu HPP (Phase-I) and transmit the electricity to respective DISCOs. This would significantly enhance the transmission capacity, reduce line losses and provide stability in the existing electricity network.

The financing agreements were signed by WB Country Director Najy Benhassine and Economic Affairs Secretary Noor Ahmed, whereas representatives of the KP government and NTDC signed the project agreements with the World Bank.

Speaking on the occasion, the PM said that hydropower generation is one of the major sources of clean and cheap energy which is in line with his government’s priorities. These two KP hydropower projects will generate 245MW electricity which will help the country decrease its dependence on expensive thermal power generation, he added.

“This environmental-friendly power generation will not only support our efforts for clean and green Pakistan but also diminish the impacts of global warming,” the PM stated.

He appreciated the World Bank’s concessional financing for the renewable energy sector, particularly in KP, and for tapping the vast hydropower potential of the province.

The WB country director reiterated his commitment to support Pakistan and appreciated the government’s measures to successfully fight the Covid-19 pandemic. He also recognized the government’s efforts to introduce long-awaited structural reforms and simplification of the project management cycle.

Economic Affairs Minister Makhdum Khusro Bakhtyar, while thanking the World Bank for its continued support, said that the government is committed to structural reforms in the country. He also appreciated the WB for committing $200 million for desert locust control and development of agriculture sector development.