Trade agreements with Afghanistan to be finalised by Jan 2021: Dawood 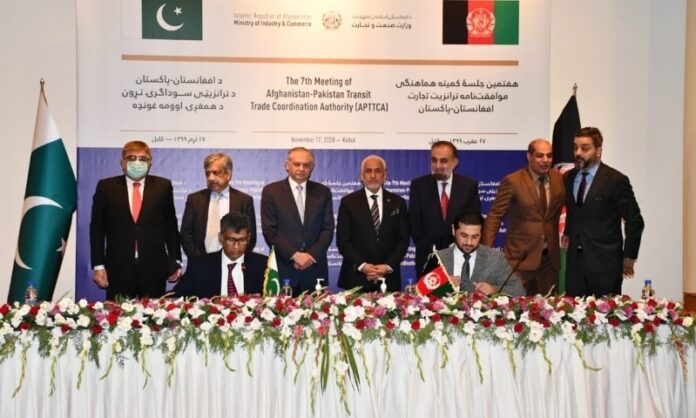 This was revealed by Adviser to Prime Minister on Commerce and Investment Abdul Razak Dawood after his participation in the APTTCA meetings held in Kabul to deal with problems hindering the smooth implementation of a revised transit treaty.

A trade delegation had left Islamabad for a two-day visit to Kabul on Monday to mull ways to boost bilateral trade ties.

Hopefully, APTTA & the PTA will be finalised by the end of Jan 2021. Will hold extensive meetings with all stakeholders in the coming days. Tremendous opportunities exist and I hope that our businessmen will realise them. 2/2

It may be mentioned that the two countries had not held any APTTA meeting with since 2016, while talks on bilateral trade were also suspended until recently when officials from Afghanistan visited Pakistan and showed a willingness to revive stalled talks.

During the meetings, extensive and fruitful deliberations were held on the whole spectrum of bilateral trade and investment relations including formalising of informal cross-border trade while the two sides also discussed a wide range of issues pertaining to trade and economic integration.

“Held an extensive round of discussions with the concerned officials and a 1-on-1 meeting with H.E. the President of the Islamic Republic of Afghanistan Ashraf Ghani. Many understandings reached on several issues relating to trade & transportation,” the adviser said in another tweet.

During his visit, Dawood also met High Council for National Reconciliation (HCNR) Chairman Abdullah Abdullah and thanked him for his support, besides calling on Da Afghan Wolesi Jirga speaker and the Da Afghanistan Bank governor.

Razak hoped that the visit would mark the beginning of a new era of trade and investment cooperation between the two countries.