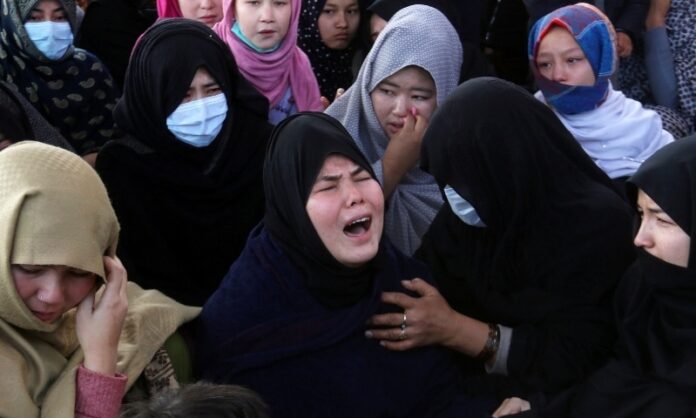 Thousands of mourners from the Shia Hazara community on Monday protested alongside the bodies of miners killed in an attack in Balochistan’s Mach coalfield area.

The 11 miners were kidnapped before dawn on Sunday as they slept near the remote coal mine in the mountainous area — 60 kilometres southeast of Quetta. The attack was claimed by the militant Islamic State (IS) group.

Up to 2,500 protesters gathered with eight of the bodies in coffins and blocked a bypass on the outskirts of Quetta, demanding justice.

“We will not end our protest until the arrest of all the assassins,” chief of Balochistan Shia Conference, Agha Daud, told AFP.

“The latest wave of killings will spread to other cities including Quetta if a decisive action is not taken at this stage,” he added.

Security officials who did not want to be named told AFP the attackers first separated the miners before tying their hands and feet and taking them into the hills to kill them. At least four were beheaded, they added.

Two of the miners were Afghans and their bodies have been sent to Afghanistan for burial, a local security official told AFP.

Sunni extremist group IS claimed the attack, according to SITE Intelligence, which monitors jihadist activities worldwide.

Also on Monday, Interior Minister Sheikh Rasheed Ahmed arrived in Quetta, where he is chairing a high-level official meeting regarding the Mach killings. He is expected to meet the Hazara protesters and speak to the press.

Ethnic Hazaras make up most of the Shia population in Quetta. They have proven to be particularly vulnerable with their distinct Central Asian features making them easy targets for militants.

Officials have long denied the presence of IS in the country, but the group has claimed a number of attacks in the past including a bombing at a vegetable market in 2019.

Though mines in Pakistan are notorious for poor safety standards, such attacks against miners are rare.

- Advertisement -
Facebook
Twitter
Linkedin
WhatsApp
Email
Previous articleNAB has gone out of control: Mandviwalla
Next articleIt’s official: IKEA is not coming to Pakistan