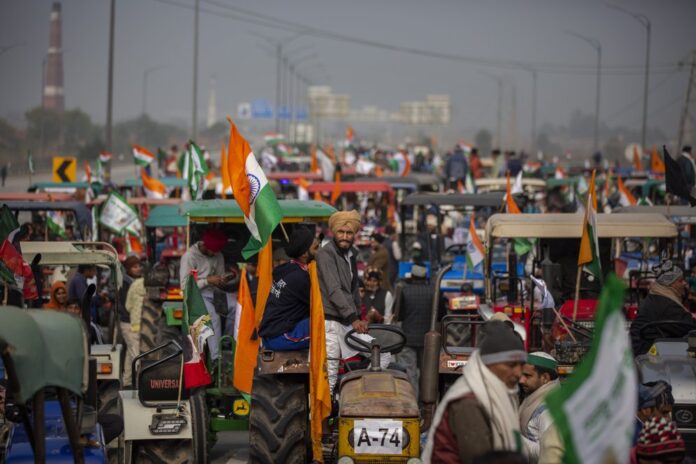 NEW DELHI: India’s top court on Tuesday temporarily put on hold the implementation of new agricultural laws and ordered the formation of an independent committee of experts to negotiate with farmers who have been protesting against the legislation.

The Supreme Court’s ruling came a day after it heard petitions filed by the farmers challenging the controversial legislation. The court said that the laws were passed without enough consultation and that it was disappointed with the way talks were proceeding between representatives of the government and farmer leaders.

Tens of thousands of farmers protesting against the legislation have been blocking half a dozen major highways on the outskirts of New Delhi for more than 45 days. Farmers say they won’t leave until the government repeals the laws.

They say the legislation passed by Parliament in September will lead to the cartelisation and commercialisation of agriculture, make farmers vulnerable to corporate greed and devastate their earnings.

The government insists the laws will benefit farmers and says they will enable farmers to market their produce and boost production through private investment.

Chief Justice Sharad Arvind Bobde said the independent committee of experts would “amicably resolve” the standoff between the farmers and the government.

Farmer unions rejected the idea of the expert committee and reiterated their demand for a total repeal of the laws.

During a virtual hearing on Monday, Bobde said that the impasse between the two sides was causing distress to farmers, and that the situation at the protest sites was only getting worse.

“Each one of us will be responsible if anything goes wrong,” Bobde told India’s attorney general, K.K. Venugopal, who was arguing for the government.

Representatives of the government and farmer leaders have failed to make progress during multiple rounds of talks over the farmers’ main demand that the laws be scrapped. The government has ruled out withdrawing the laws but says it could make some amendments.

The two sides are due to meet again on Friday to discuss the laws.

On December 30, the two sides reached a consensus on two issues — that the government would continue its subsidy of electricity for irrigating farms, and that farmers would not be punished for burning crop residues, a cause of air pollution.