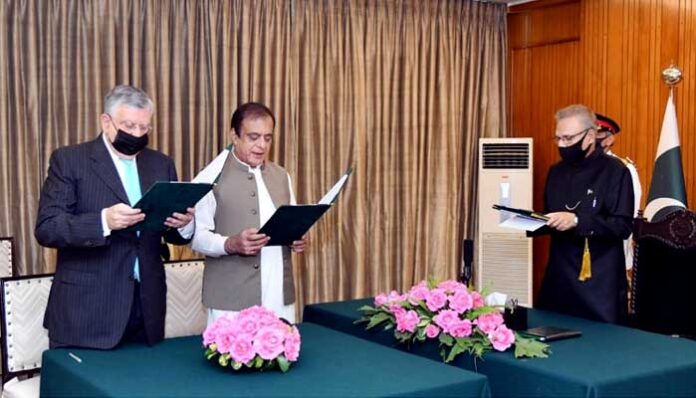 ISLAMABAD: Cabinet Division on Saturday issued notification for the appointment of Shaukat Tarin as federal minister for finance and revenue and Shibli Faraz as minister for science and technology after the oath was administered to them by President Arif Alvi.

The notification issued by the Cabinet Division read that in the exercise of the powers conferred by clause (1) of Article 92 of the Constitution of the Islamic Republic of Pakistan, the president, on the advice of the prime minister, has been pleased to appoint Shaukat Fayaz Ahmed Tarin as minister for finance and revenue and Senator Shibli Faraz minister for science and technology.

They have been administered the oath of office of Federal Ministers by the President.

“In terms of rule 3(4) of the Rules of Business, 1973, the prime minister has also been pleased to allocate/re-allocate the portfolios to the federal ministers with immediate effect,” the notification read.

Moreover, Fawad Chaudhry has been appointed as federal minister for Information and Broadcasting.

The notification further stated that consequent upon the above re-designation, Omar Ayub Khan and Hammad Azhar shall also cease to hold the additional portfolios of Petroleum Division, and, Finance and Revenue, respectively, with immediate effect.