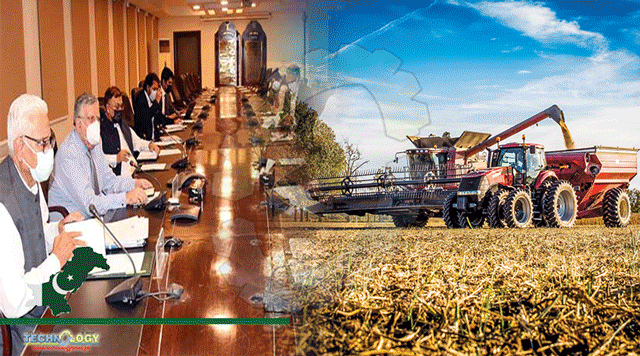 ISLAMABAD: Finance and Revenue Minister Shaukat Tarin on Tuesday highlighted the importance of curtailing the role of middlemen effectively, which he said would enable the growers to get 35 to 40 per cent higher returns of their agricultural produce.

The finance minister was speaking at a meeting with Special Assistant to Prime Minister (SAPM) on Food Security Jamshed Iqbal Cheema, according to a press statement issued by the Finance Ministry. SAPM on Revenue Dr Waqar Masood, Secretary Finance Division and Additional Secretary, Ministry of National Food Security and Research also participated in the meeting.

The meeting reviewed the existing farm gate price mechanism and the problems faced by the farmers in transporting the perishable commodities particularly vegetables and fruits to the nearest market or first point of sale.

The meeting discussed role of middlemen who make money at the expense of farmers particularly with small and marginal land holdings.

Tarin said that achieving economic sustainability was the biggest challenge in the field of agriculture and highlighted the importance of boosting farm productivity by facilitating farmers through interest-free agri loans so that they get fair share of their produce and stressed the need to empower farmers by offering interest-free loans.

He discussed modalities for provision of microcredit to farmers enabling them to purchase fertilisers, pesticides and other basic inputs through syndicate of banks and microfinance institutions.

The provision of interest-free loans to the small farmers would transform the agricultural sector and end exploitation by the middlemen.

The underlying rationale is to pave the way towards sustainable farming by offering interest-free loans with maximum flexibility. He directed to work out a mechanism for disbursement of microcredit to farmers with smaller land holdings and discuss in the next meeting.

The minister also discussed a multi-dimensional approach to streamline agro-industry and underlined the need to build commodity warehouses and cold storages facilities for farmers throughout the country, enabling them to transport perishable commodities (kitchen items) to the point of sale in time.

He stressed the need for building strategic reserves for essential commodities.

Meanwhile in a separate development, Shaukat Tarin has sought more time from the National Assembly speaker for presenting the annual budget for fiscal year 2021-22 (FY22).

According to a report by a local media outlet, the delay is a result of  continual rolling of heads at the Ministry of Finance as the ruling party’s indecisiveness has affected daily operations.

They said the budget session will continue for at least three weeks and if the session starts in the mid of June, it cannot be concluded by the end of the month.