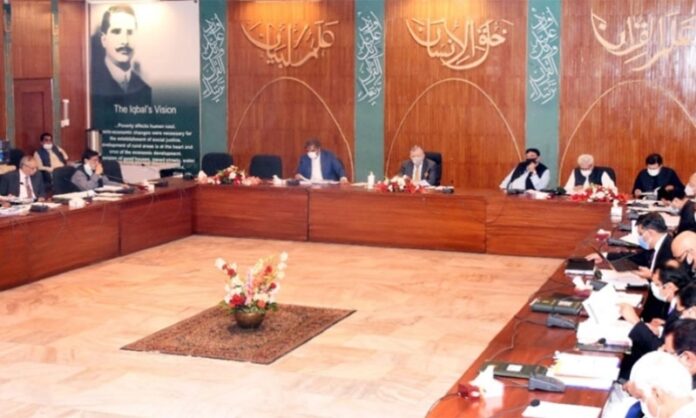 ISLAMABAD: Federal Minister of Planning Development and Special Initiatives, Asad Umar, has said that the Economic Coordination Committee (ECC) on Wednesday will approve $1 billion for the import of more vaccines during the next fiscal year.

Talking to a group of media persons here on Tuesday, he said that the PTI led government is ready to spend more on vaccines to avoid strict lockdowns.

Talking about the meeting of National Economic Council (NEC) which was held on Monday, the minister said that the forum has approved 36.4 per cent increases in national development outlay with the allocation of Rs2, 102 billion, including PSDP of Rs900 billion in fiscal year 2021-22 (FY22) as compared to Rs1, 527 billion of the outgoing financial year (FY21).

He said Prime Minister Imran Khan has other priorities as he wants allocations for the neglected parts of the country.

“Not only roads but the federal government is even funding sanitation projects in Sindh,” he said, adding that not a single inch of a motorway was constructed by the Sindh government.

Talking about funding under CPEC, the minister said the foreign investment under the corridor programme was being diverted to the agriculture sector.

“Since the investments are channelised to other priority sectors the CPEC funding was not visible,” the minister said while rejecting the impression that Chinese investment was halted.

“CPEC is a national development program and we need to avoid doing politics on the projects and programmes being finalised under CPEC umbrella,” he added.

In reply to a query about the frequent holding of meetings of CDWP and approval of projects ahead of the annual budget, Asad Umar said that the meetings of the forum were being held as per requirement of law.

He also informed that NEC has also decided to meet once in every quarter of the fiscal year instead of the last weeks of the financial year.

“Unlike the traditional way of reviewing only federal projects, the NEC would also review the provincial projects,” the minister said.