Take one for the team: SBP governor tells middle class

Baqir says overseas Pakistanis will send higher amounts to their families as PKR depreciates; Opposition warns govt of riots over food and essentials 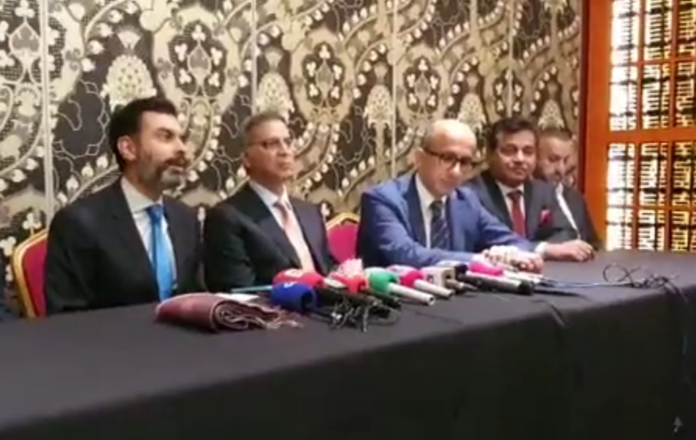 State Bank of Pakistan (SBP) Governor Dr Reza Baqir has said that while people who use imported products and can somewhat manage to travel abroad for vacations will find it difficult to downgrade their standard of living, overseas Pakistanis and their families will benefit from the ongoing depreciation of the Pakistani rupee against the US dollar.

The remarks were made by the central bank chief in a press conference in Manchester, United Kingdom (UK) on Thursday.

“Obviously people with the power to purchase expensive imported items, the ones who can afford vacations abroad, will face some difficulty,” Baqir said.

“Rising dollar rates benefit some people and harm others. Overseas Pakistanis benefit because their family members receive more remittances. We should not forget those who benefit,” the ex-IMF official added.

“In every economic policy, some people benefit while others do not, so it should also be taken into account how many people have benefited.”

The State Bank of Pakistan Governor says in Manchester that the rise of dollar against Pakistani Rupee is helpful for overseas Pakistanis, good news for them as exchange rate is good for some (overseas) and bad for some (Pakistanis) pic.twitter.com/1KEureigAx

“Suppose if our remittances in this year reach $30 billion — we hope they will be even more — and if our exchange rate [against the dollar] in the last few months has depreciated even 10 per cent then an additional $3bn are reaching the families of overseas Pakistanis — this turns out to be more than Rs500bn.”

He said the “additional money” is being sent to Pakistanis in the country, reiterating that every economic policy of the government proves to be beneficial for some, while not for others.

The SBP chief also talked about the country’s economic situation and said GDP growth had been recorded at close to 4pc in the fiscal year that ended in June.

It is pertinent to mention here that a sizable amount of Pakistan’s population is middle class.

Baqir’s statement comes as the rupee, which currently being traded above 173 in the inter-bank market, has lost over 12 per cent of its value against the greenback since its recent high achieved five months ago.

Speaking about Pakistan’s compliance with the Financial Action Task Force’s (FATF) targets, adding that Pakistan had fulfilled 26 out of its 27 conditions.

“Pakistan will soon come out of the grey list,” he said.

On talks with the International Monetary Fund (IMF), the central bank governor said that negotiations with the fund are heading in a positive direction. “The deal with the IMF will be made public and added that no deal will be struck with the IMF that will further damage the country’s economy.

Pakistan and the International Monetary Fund held their latest talks in Washington from October 4 to 15 for the release of a $1bn tranche from a $6 billion extended loan facility approved in 2019.

Reports had suggested that the talks did not lead to a staff-level agreement because of differences over a macroeconomic framework and uncertainty over the nation’s economy. However, the government has denied this.

The presser has attracted criticism back home; however, Pakistan Peoples Party (PPP) Senator Saleem Mandviwalla took exception to the comments and said it was the first time that he had seen a central bank chief hailing the devaluation of the rupee as something positive.

“This means he isn’t the SBP governor but of some other country’s [bank] where devaluation is considered good,” he said.

Mandviwalla said everyone said the devaluation had “wrecked” the nation.

He also hit out at the government over the country’s economic situation which he said was “dangerous”. Mandviwalla claimed that the country was heading towards riots over food and essentials where people would come out on the streets due to hunger.