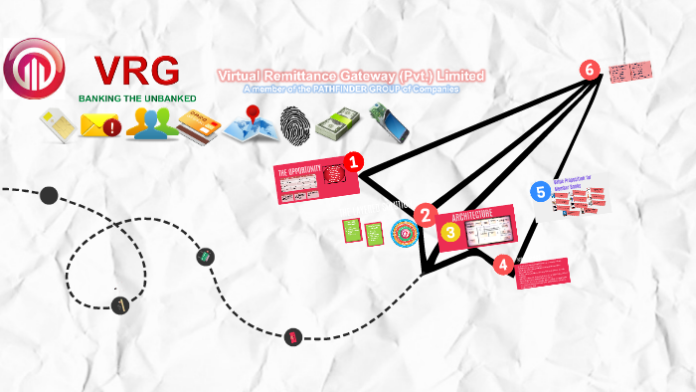 Virtual Remittance Gateway (VRG), the fintech company undertaking the State Bank of Pakistan’s (SBP) Asaan Mobile Account (AMA) scheme, Tuesday announced that AMA had achieved 1 million accounts prior to the commercial launch of the interoperable platform, which is subject to a decision pending in the court.

VRG says that the 1 million connections processed 11 million transactions worth over Rs6.2 billion turnover. The fintech company further says that reaching 1 million AMAs had been achieved without any marketing; and just via word of mouth, which shows the acceptability and ease of use.

The company says the account holders include FC soldiers posted on Western borders, receiving their salaries, and then using this channel to send money to their families back home, village-residing parents sending money to their sons studying in cities, city workers, maids, drivers and labourers, which is the demographic AMA is designed to serve.

Speaking at VRG’s Karachi-based headquarter, COO Salman Ali said, “Reaching this milestone is offering financial services to masses and facilitating the poor by bringing digital payments into their lives.”

“With this milestone and focusing on enhancing financial inclusion and working closely with the State Bank of Pakistan (SBP), Pakistan Telecommunication Authority (PTA) and telecom operators, VRG being a PSO/PSP jointly licensed company of Pakistan has cemented its position of providing many-to-many financial services platform,” a statement from the company read.

The company further expects that by the end of the year, the AMA accounts will hit the 5 million mark and will add 10 million more accounts by March next year, and aims to enable 65 million new AMA accounts to be facilitated by USSD channel by 2023 under the National Financial Inclusion Strategy (NFIS), which is part of the 2030 UN’s Sustainable Development Goals.

Initially concepted in 2012, the Asaan Mobile Account scheme was started under the third-party service provider (TPSP) regulations introduced in 2017 by the SBP. Under the AMA scheme, a USSD code enables banks and telcos to open bank accounts on an SMS-based service on cell phones without any requirement of connecting to the internet.

In July last year, VRG became the first company to receive a formal go-ahead from the State Bank of Pakistan and the PTA for the commercial launch of a USSD-enabled interoperable platform under TPSP regulations, after completing its pilot in March 2020.

VRG claims to be revolutionising the destinies of tens of millions of Pakistanis, which is almost 80 per cent of the adult population without bank accounts, through the AMA, creating a vast change in their lives by allowing low-cost banking, eventually consolidating the fragmented payments ecosystem of Pakistan and enhancing financial inclusion.

A user can simply dial *2262# on a smartphone or a non-smartphone, and sign up with any of the partner banks using just a CNIC. Once activated, the Asaan Mobile Account allows users banking transactions like balance enquiry, mini-statements, fund transfers, mobile top-ups, utility bill payment, pin changes, and account closure through an SMS-based service, and, therefore, has the potential to penetrate deep into the low-income demographics and give them low-cost banking.

Following the approval for commercial launch, VRG went through intense due diligence by the PTA, SBP and law enforcement agencies, and obtained the commencement certificate from PTA in April 2021, and the final authorisation letter from SBP in May 2021.

But soon after, a stay order was obtained against PTA and VRG to prevent it from undertaking a commercial activity under AMA, which VRG says is aimed at serving the people of Pakistan.

“The court decision usually takes 90 days, whereas over 250 days have already passed, since the judgment reserved which one understands is due to a huge backlog of cases,” VRG said in a statement. “The expectation is that in the greater public interest affecting the lives of tens of millions of poor people, the honourable court will give a decision soon,” it added.