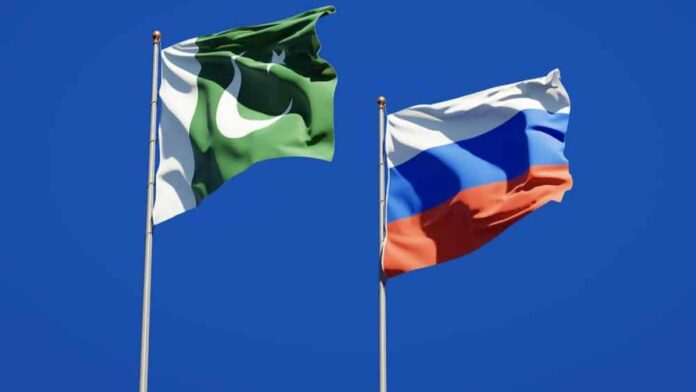 ISLAMABAD: Minister of State for Petroleum Mussadik Malik flew out from Lahore yesterday to hold talks about securing the supply of Russian crude oil at a discounted rate. Malik is leading a delegation to the Russian Federation that is hoping to secure a deal with Moscow that could help ease the skyrocketing price of fuel in the country.

Why is Russia selling cheaper oil?

The issue of importing cheap Russian oil had been a major talking point when the incumbent PDM government came to power. Ever since its invasion of Ukraine in March, Russia has been selling oil at a discounted rate to the Asian market. India and China have been at the forefront of acquiring this discounted oil, and their combined oil imports have overtaken those from the 27 EU member states.

Countries like India are not only importing cheaper fuel from Russia and undercutting the global economic crisis domestically by having cheaper oil, but are even exporting the oil at higher rates than they get from Russia.

Many had suggested that Pakistan should also capitalise on the situation and strike a deal with Russia. In fact, when former prime minister Imran Khan had been ousted as a result of a no-confidence motion in parliament, he claimed that he had reached an understanding with the Russians to buy cheap oil from them and was deposed by an international conspiracy as a result.

Despite the claims, the Russian Ambassador to Pakistan had confirmed that no MoU was signed on the trade of wheat and oil at cheaper prices with Pakistan. However, the suggestion was still a cause of great debate.

What are the issues with importing Russian oil?

So why hasn’t Pakistan been able to do the same up until now? The problem is three-fold. For starters, given our particular dire-straits it might prove to be more economically disastrous to test the patience of the United States and other Western powers that have put sanctions on Russia. It would also jolt the relationship we have built with the Arab world over decades if we started buying Russia’s Ural blend of crude oil over the Arab blend. The second part of the equation is the fact that currently we do not have the facilities to process Russian crude oil in Pakistan.

The final issue is that Pakistan as a market is not large enough for Russia to consider selling their oil at a discounted price. Which means any deal struck with Russia might not be worth the diplomatic risk. Apart from this another technicality that is often ignored is the fact that the Russian Ural oil has a relatively higher content of sulphur, therefore the price of this blend is lower than the market benchmark. Refining high-sulphur crude oil is costly owing to its high oxidation and corrosion properties. The costs of excessive oxidation and corrosion damage caused to a refinery not adequately equipped to sustain high sulphur crude will outweigh the revenues from the cheaper oil.

There is also an issue with how we would pay for it. To get Russian oil, nations must first purchase the currency, which may be done at the Central Bank of Russia or on the foreign exchange market. Dealing directly with Russia’s Central Bank, which has been sanctioned, will be difficult. Buying rubles on the open market will necessitate the use of non-sanctioned Russian banks to complete the transaction. Considering Pakistan has just gotten out of the FATF grey-list and that there is still an IMF programme hanging in the balance, the risk might be massive.

So what is the plan for the Pakistan delegation?

Mussadik Malik flew out from Lahore bound for Moscow with a trim team. Besides him, were the  secretary petroleum and another official of the petroleum division. For the visit, the ministry has identified four areas of cooperation between Pakistan and the Russian Federation in the oil and gas sectors.

The immediate start of the Pakistan Stream Gas Pipeline project will also be discussed during these strategic talks with the Russian Federation besides the supply of Russian crude oil and gas to Pakistan at discounted rates, they added.

Perhaps more importantly, Pakistan Refinery Limited and Pak Arab Refinery Company (PARCO) have been assigned to prepare comprehensive strategy documents and presentations regarding cooperation of the Pakistan & Russian Federation on crude oil and DG (Oil). Currently, Parco’s refinery is the only mild conversion refinery in Pakistan, which means it is the only refinery in Pakistan already equipped to refine Russian oil.

It is pertinent to mention here that the Russian President Vladimir Putin met with Pakistani Prime Minister Shehbaz Sharif on the sidelines of the Shanghai Cooperation Organization summit in Samarkand, Uzbekistan in the month of September 2022. Both leaders agreed to continue economic cooperation, with particular regard to energy projects while it was also agreed to hold the next IGC (Pak-Russia Inter-Governmental Commission) meeting in Islamabad. And, the petroleum division is finalising necessary paperwork for the upcoming meetings with the Russian Federation.