Copper, gold production from Reko Diq likely to start in 2027-28 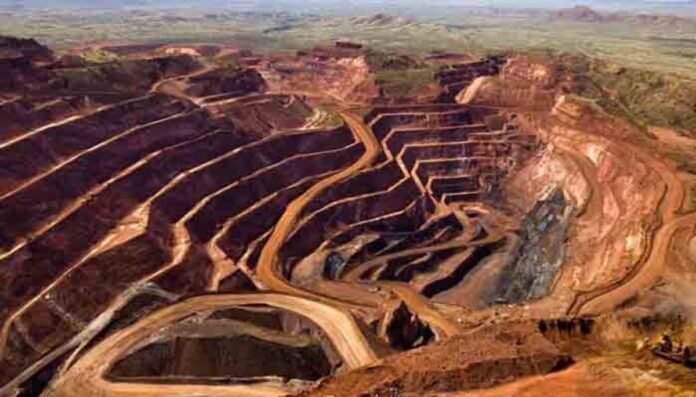 ISLAMABAD: The first batch of copper and gold production from the Reko Diq project is expected to start in 2027-28 for which final agreements are being finalised by teams from Barrick Gold Corporation and Pakistan.

This was disclosed by Barrick Gold President and Chief Executive Mark Bristow in a press conference held here on Monday. Prior to addressing the press, Federal Minister of Finance, Miftah Ismail and Bristow held a meeting during which both parties shared a clear vision of the national strategic importance of the Reko Diq copper-gold project and expressed commitment to developing it as a world-class mine that would create value for the country and its people through multiple generations.

“An agreement in principle reached between the government of Pakistan, the provincial government of Balochistan, and Barrick Gold earlier this year provides for the reconstitution and restart of the project, which has been on hold since 2011,” Bristow said.

He added that the company will not only operate the mine but also own 50 per cent of it, while 25pc ownership will belong to the Balochistan government, and 25pc by Pakistani state-owned enterprises (SOEs).

According to Mark Bristow, Barrick Gold wants the Pakistani government to ratify the Reko Diq gold and copper deal with the parliament and Supreme Court for legal protection. He said that during the previous administration’s tenure, Pakistan and the consortium led by Barrick Gold reached an out-of-court settlement under which Barrick decided to become a 50pc partner in the mining project, while a Chilean company decided to exit a contract in exchange for $900 million.

He said Barrick is still negotiating the legal framework and desired legislation pertaining to the transaction with the current government as they desire that the parliament and the Supreme Court review the deal for the long-term viability of this project’s investment.

According to him, definitive agreements underlying the framework agreement are currently being finalised by teams from Barrick and Pakistan. Once this has been completed and the necessary legalisation steps have been taken, Barrick will update the original feasibility study, a process expected to take two years.

Construction of the first phase will follow that, with the first production of copper and gold expected in 2027-28. “During negotiations, the federal government of Pakistan and Barrick confirmed that Balochistan and its people should receive their fair share of the benefits as part of the Pakistan ownership group,” Bristow stated.

“At Barrick we know that our long-term success depends on sharing the benefits we create equitably with our host governments and communities. Balochistan’s shareholding will be fully funded by the project and the federal government, allowing the province to reap the dividends, royalties and other benefits of its 25pc ownership without having to contribute financially to the project’s construction or operation,” he said.

He emphasised that it is equally important that Balochistan and its people should see these benefits from day one; even before construction starts. “When the legalisation process has been completed we will implement a range of social development programmes, supported by an upfront commitment to the improvement of healthcare, education, food security and the provision of potable water in a region where the groundwater has a high saline content,” said Bristow.

“We believe that the future of mining lies in mutually beneficial partnerships between host countries and world-class mining companies.  The Reko Diq agreement exemplifies this philosophy, and also signals to the international community that Pakistan is open for business,” the Barrick Gold president and CEO said.

He further added that subject to the updated feasibility study, Reko Diq is envisaged as a conventional open pit and milling operation, producing a high-quality copper-gold concentrate.

It will be constructed in two phases, starting with a plant that will be able to process approximately 40 million tonnes of ore per annum which could be doubled in five years.  With its unique combination of large scale, low strip, and good grade, Reko Diq will be a multi-generational mine with a life of at least 40 years. During peak construction the project is expected to employ 7,500 people and once in production it will create 4,000 long-term jobs.

According to Barrick chief, Pakistan is the most desirable location for investment while legal protection is essential in Pakistan due to the substantial foreign investment. He said that the international court of arbitration had ruled in favour of foreign companies, including Barrick, in a legal dispute between Pakistan and foreign firms.

He said that the company, which had been fighting for a long time, had decided to find a way to execute the project because the conflict was bad for all parties whereas a solution would attract additional investment in the region, adding that they had an extensive history of working with IFC, which managed private banks.

“We are negotiating with IFC and export-import banks for a $4 billion debt comprising fifty percent of the total debt. $2 billion will be secured by the project’s consortium,” said Barrick chief.

In response to a question about funding from the Barrick side, he ruled out offering an IPO to generate funds and added that they had a strong balance sheet and did not need to raise money because they could support investments.

Regarding the establishment of a refinery in Pakistan to process the project’s raw materials, he stated that at this time it is not feasible.

In response to a question about the security situation in Balochistan, he said that the Barrick firm had worked in conflict-ridden regions and they will devise their own strategy for the project’s execution. “We will invest in the communities, in social responsibility, and provide 100 percent employment to Pakistani nationals,” he said, adding that another objective of the project would be the importation of technology to train locals.

He said that scholarships would be offered to Pakistani students at the world’s leading universities.

In response to another question, he said that they would also establish a distillation plant and adhere to all international environmental standards. The company would employ a three-pronged strategy to provide high-quality assets in order to unlock additional value for the Pakistani and Baloch people. Balochistan’s infrastructure, water security, and energy supply will be improved.