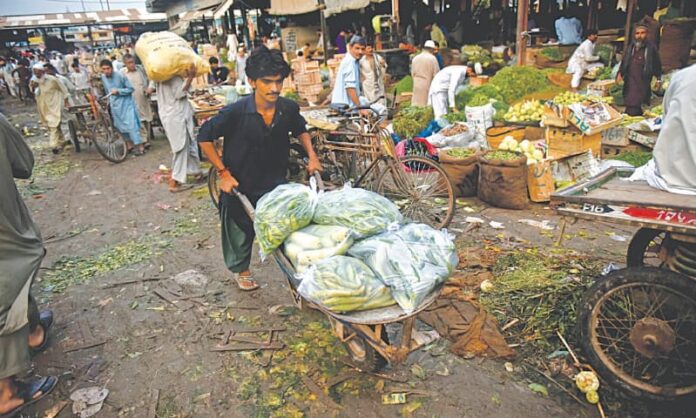 ISLAMABAD: Amid reports of massive irregularities, the Islamabad Capital Territory (ICT) administration has decided to conduct an audit of the capital’s Sabzi Mandi.

According to sources, irregularities worth Rs17.9 million had surfaced in the collection of entry fee at Sabzi Mandi, following which the administration has decided to conduct a four-year audit of the market record.

In January 2018, former market committee chairman Rosh Dil Khan Hoti had signed an agreement worth Rs61.2 million per annum with the M/S Saido & Co for a period of two years. As per the contract, the party was bound to make payments worth of Rs15.3 million on a quarterly basis. However, a shortfall of Rs17.9 million was found in the overall payments under the head ‘toll and entry fee’ of the Sabzi Mandi.

“Neither the market committee imposed a penalty on the company nor was there any notice served for late payments despite the court giving the decision in favour of the department to recover the arrears in 45 days,” an insider informed.

According to sources, the market committee has been running the affairs of Sabzi Mandi in a highly unprofessional manner. Only the chairman and vice chairman have been active while rest of the members have almost been nonexistent, resulting in price control lapses, besides problems related to cleanliness, especially during rain.

Sources further informed that more than two dozens of employees were working illegally at places other than the market, while the market committee has hired the services of around 40 employees to run the affairs, with costs running into millions.

Meanwhile, ICT Agriculture Director Waqar Anwar in his report stated that the non-implementation of contract clauses could not be possible without the involvement of someone “who wants M/s Saido & Co to continue its operations in clear violation of the law”.

He directed the administrator to initiate a comprehensive inquiry to calculate the actual loss to the exchequer, and also fix responsibility for the loss by digging out the acts of omission and commission on the part of the erstwhile market committee.

It may be noted that the Ministry of Interior had de-notified the committee last month. Subsequently, the district administration gave the charge of Sabzi Mandi administrator to Kamran Cheema, who enjoys a good reputation in the department.