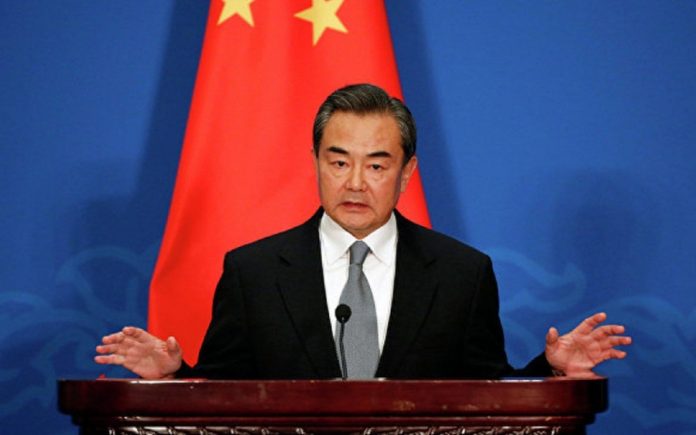 Protectionism will only hurt oneself and unilateral moves will bring damage to all, Chinese FM tells UNGA

NEW YORK: China has warned that its critical relationship with the United States could break “like a glass”, and used the most global of stages to warn the Trump administration that “it wouldn’t be pushed around on trade”.

Chinese Foreign Minister Wang Yi insisted that his country “will not be blackmailed” or bow to pressure. “Protectionism will only hurt oneself, and unilateral moves will bring damage to all,” he told the United Nations General Assembly gathering of world leaders.

President Donald Trump this week cranked up punitive tariffs on China, and Beijing responded in kind, escalating a trade war between the world’s two largest economies.

Trump upped the ante by then accusing China of meddling in the upcoming US midterm elections because it opposes his trade policies. He has presented little evidence to back up the allegations, which China says are untrue.

Wang, in separate remarks at a think tank, said the US-China relationship was at a critical point, four decades since ties were normalised.

“The relationship between our two countries is a common asset. It must be preserved and valued. It’s the result of generations of people’s efforts,” Wang said. “It’s like a glass. It’s easy to break it and would be difficult to repair,” he said.

Wang presented China as upholding multilateral institutions drawing an implicit contrast with Trump’s anti-globalist stance. But Beijing’s top diplomat warned against the suspicion that China seeks global hegemony and to displace the US as a world leader is false.

“This is a serious strategic misjudgment,” Wang told the Council on Foreign Relations in New York, “that will be extremely detrimental to US interests and the future of the United States.”

He said China rather seeks a path of peaceful development. He defended China’s assertive behaviour in the South China Sea, where it has built man-made islands to reinforce its sweeping territorial claims that are disputed by its neighbours. He said military facilities on those islands are for defensive purposes to counter military activities by other nations in the area, including the United States.

Wang also defended China’s recent participation in military drills with Russia that have added to US anxiety that its key strategic rivals are setting aside historical differences and teaming up against it. He said military-to-military ties are normal to build “mutual understanding”.

Aside from those disputes, the main driver of the current discord between the US and China is trade.

Trump increased tariffs Monday on $200 bn of Chinese goods. Beijing responded by imposing penalties on $60 bn of American products. That was on top of an earlier duty increase by both sides on $50 bn of each other’s goods. The tit-for-tat is fuelling anxiety that smaller nations will suffer.

Behind the trade dispute are US allegations that China uses predatory tactics to overtake American technological dominance. These tactics, the US charges, include cyber-theft of US companies’ trade secrets and a requirement that foreign companies hand over proprietary technology as the price of access to the Chinese market.

Wang denied that China was stealing technology and forcing companies to transfer technology as a condition for investing in the country.

He described instead a symbiotic commercial relationship in which the US companies have a comparative advantage in technology and work in partnership with Chinese firms to help them access China’s growing market.