Pakistan for strengthening of economic cooperation within D-8 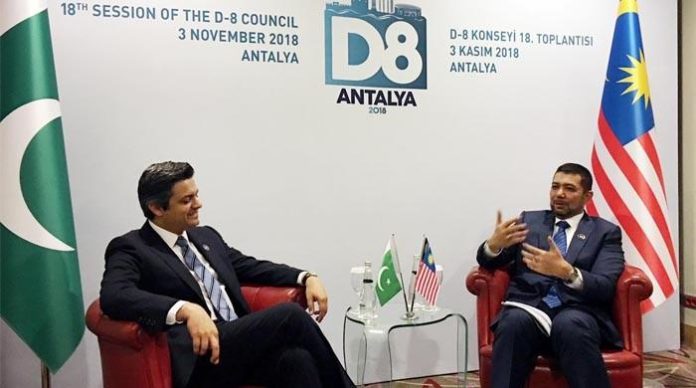 ANKARA: Minister of State for Revenue Muhammad Hammad Azhar, who is leading Pakistan’s delegation to the 18th Session of the D-8 Council of Foreign Ministers being held at Antalya, Turkey, reiterated Islamabad’s strong commitment and continued support for achieving the objectives of the D-8 Organisation.

Speaking at the plenary session of the meeting, the minister highlighted the role being played by Pakistan in the D-8 for the realisation of its vision, including as its Chair from 2012-2017.

In order to achieve tangible progress, he called for speedy implementation of agreements signed under the D-8, in particular in the context of preferential trade; developing small and medium enterprises; simplification of customs and visa matters; and cooperation in increasing communication linkages.

He also underscored the need for increasing the intra-D-8 trade. Mr. Muhmmad Hammad Azhar took the opportunity to showcase the business friendly policies of the government of Pakistan, and availability of numerous investment opportunities as well as human resources.

He also highlighted the projects underway in Pakistan as part of China Pakistan Economic Corridor (CPEC).

He underscored that under the leadership of Prime Minister Imran Khan, the new government in Pakistan was fully committed to building a changed, reformed, New Pakistan, by improving framework of transparency and accountability, enhancing ease of doing business, and upgrading governance structures.

During these interactions, views were exchanged on increasing trade and commercial cooperation, both in the bilateral context as well as under the umbrella of the D-8 Organization for Economic Cooperation.