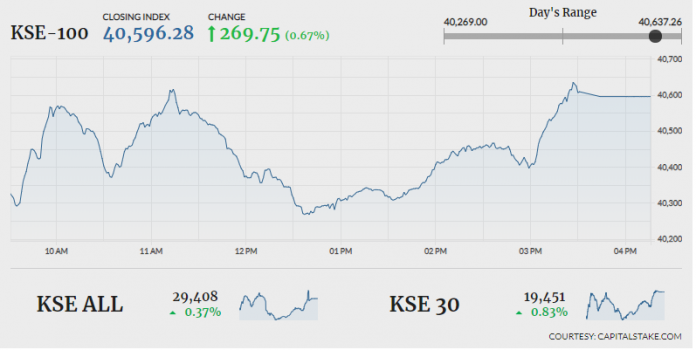 KARACHI: After morning bumps, Pakistan Stock Exchange (PSX) managed to stand its ground to close Tuesday’s session in green. Indices swung in both directions until they finally picked the green path and ended the day with gains. Foreign investors continued to be net buyers on Monday with a net inflow of $1.68 million.

As per latest data released by the State Bank of Pakistan, overseas Pakistani’s remitted $12.77 billion during the first seven months of the current fiscal year as compared to $11.38 billion in the same period last year (up by 12.22pc).

Meanwhile, according to data released by Pakistan Bureau of Statistics, the country’s trade deficit plunged by 9.66pc from $21.32 billion in the same period last year to $19.26 billion in the current year.

Rafhan Maize Products Limited (RMPL 0.00pc) published its financial results for FY18. A final cash dividend of Rs125 was announced in addition to an interim dividend (Rs300) already paid. The company’s sales were up 14pc YoY, whereas earnings per share improved from Rs475.54 in the last year to Rs516.62 in the current year.