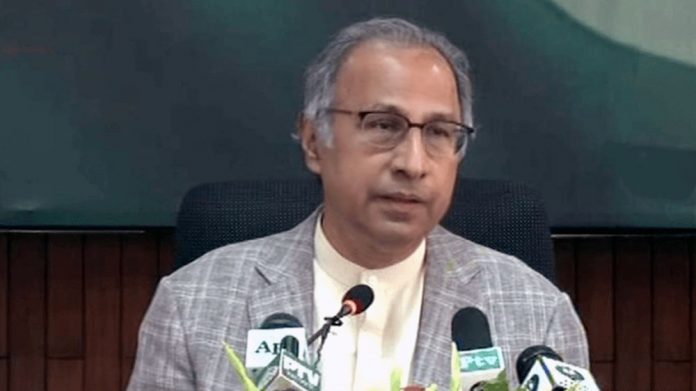 LAHORE: Adviser to Prime Minister on Finance Abdul Hafeez Sheikh on Thursday constituted a high-powered committee to rectify the anomalies in the proposed budget and to address the legitimate grievances of the business community.

Hafeez Shaikh was talking to an 18-member delegation of the Federation of Pakistan Chambers of Commerce and Industry (FPCCI), which was led by its President Engineer Daroo Khan Achakzai.

Adviser to Prime Minister on Commerce Abdul Razak Dawood, Adviser to PM on Austerity Dr Ishrat Hussain and Federal Board of Revenue Chairman Shabbar Zaidi were also present on the occasion.

Giving an overview of the problems that the Pakistan Tehreek-e-Insaf government faced after coming into power, Dr Abdul Hafeez Shaikh said that the incumbent government inherited Rs31 trillion as domestic debt, with foreign loans hovering around $100 billion.

He said foreign reserves stood at less than $10 billion while exports in the last five years had registered zero per cent growth. “Trade deficit was touching the $20 billion mark while fiscal deficit had reached at a staggering Rs2.3 trillion. Besides, circular debt was increasing by Rs38 billion every month.”

He said instead of trading, the government’s thrust would be on the manufacturing sector, as it created more job opportunities for people. “The private sector will be given tax breaks on new hiring so as to motivate it to create more jobs.”

Shaikh said that the FPCCI and top leaders of the private sector have a proper representation in the newly-constituted committee, as the government intends to make it an effective forum where issues could be addressed in a timely manner.

Speaking on the occasion, UBG Chairman Iftikhar Ali Malik expressed confidence in the government’s fiscal policies, saying that the business community was ready to help the government achieve its target of economic stability.

However, he reiterated that the government should accelerate its efforts with regard to creating a business-friendly environment in the country and should extend all-out facilities for promotion of investment and business activities.

He said under the dynamic leadership of Prime Minister Imran Khan, they (private sector) were confident that the economic team of the PTI government would deliver the goods.

Malik said the prevalent economic situation could improve through a regular inflow of US dollars. “For this, exports, remittances and investment should be focused while unnecessary imports should be curtailed.”

Other trade leaders also put forth concrete proposals for strengthening of the national economy on sound footings.

The government officials listened to the delegation members patiently and assured them of sorting their problems on priority.