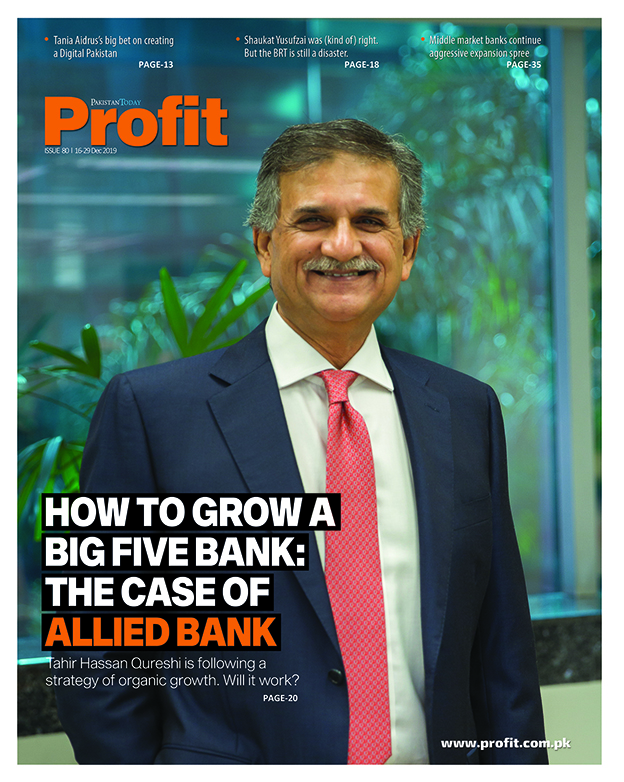 Lending to the government is not banking, Allied Bank Limited Chairman, Naeem Mukhtar told me over food at a family wedding in Lahore some years ago. It is the private sector that he’d want to lend to. You know, real banking. Years later, when going over ABL’s balance sheets for this issue’s cover story on the bank, I found its lending profile was still government-heavy.

So they’ve finally settled in for lazy banking, then? Well, that’s debatable, actually.

It’s been a long slog at Number Five for the bank, ever since it was nationalized in 1974. Though it might not have improved its position within Pakistani banking sector’s Big Five, none of the others have changed their positions either, barring Habib Bank Limited, which, at the culmination of a long arc, has finally bested National Bank of Pakistan.

Since our cover story looks at ABL’s deposits side in great detail, it would be better to use this space to look at the lending side of the banking equation.

Pakistani banks have been criticised since a while now for being lazy lenders. Why roll up their sleeves and get into the grind of evaluating risks of credit seekers when the biggest, and safest, borrower, always wants more money to borrow? Talking about the government here, of course, which, because of newer IMF conditions, has to shift even more of its borrowing to the private banking sector.

But why shouldn’t the banks lend to the government? Where else should it lend its money? Consider consumer credit: because of the increasing mark up rates and low economic growth, banks that were aggressive in their lending on the consumer side have been seeing ever increasing instances of loan defaults.

Well, what about that other segment, oft-cited as a real growth market, that could even serve as an impetus of growth of the economy as a whole as well: the small and medium enterprises? Well, the idea of lending to the SMEs is alluring, granted. But it is only when the banks want to take a look at the books that it becomes clear why the segment doesn’t have a larger share in banks’ lending profile. For starters, there aren’t many ‘books’ to begin with. The general culture of informality regarding paperwork in the country is such that even God-fearing, honest small businessmen don’t have their complete (and correct) accounting, control and monitoring data. And in case of defaults, getting one’s money back is difficult, with a torpid judiciary moving at a glacial speed and lawyers specialising specifically in dragging out cases over decades.

Banks aren’t like other businesses. They are working on other people’s money. Yes, all businesses operate on OPM, but in the case of the banking sector, it is essentially the depositors’ money, not the investors’, that is being leveraged. For religious reasons, many depositors in Pakistan don’t even want interest. The least that the banks could do is keep their money safe. Having a government-heavy lending profile isn’t merely the lazy approach. Till the legal and economic policy frameworks change, I am afraid it might just be the responsible approach.