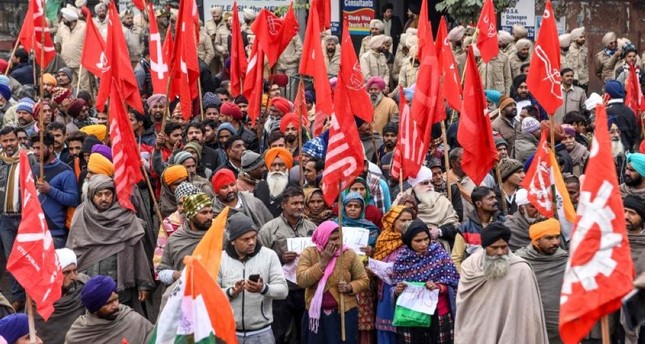 NEW DELHI: Banking and other businesses across India suffered on Wednesday as millions of workers went on strike protesting the Hindu nationalist government’s economic policies, especially the planned sale of several state-owned companies including Air India.

Protesters marched on the streets of New Delhi and several state capitals in response to the strike call given by 10 workers unions.

Amarjeet Kaur, a trade union leader, said workers were opposed to the proposed sale of natural resources and state assets.

“The working class is on roads today,” she said, adding that the 90-100 per cent of the workers had joined the strike in the defence, coal, petroleum, income-tax and service sectors in 15 to 16 Indian states.

The government says it plans to sell the companies because they had been losing money for years. It also wants to bolster revenues as it prepares to unveil the federal budget on Feb 1 for the financial year 2020-21.

The federal government warned the workers that they won’t receive salaries for Wednesday if they went on strike.

The government projected a 5pc economic growth in the current fiscal year, April 2019 to March this year, sharply down from last year’s 6.8pc with the manufacturing, cement and power sectors faring poorly.

Also, the sale of cars and other vehicles dipped by nearly 13pc in mid-2019.

Prime Minister Narendra Modi’s government recently recapitalised the banks and offered tax incentives for domestic companies. But these steps have so far not increased the rate of investment, according to data released by the government’s National Statistical Office.

In May last year, government data had shown that joblessness in the country was 6.1pc of total labor force during 2017-18, the highest in 45 years.