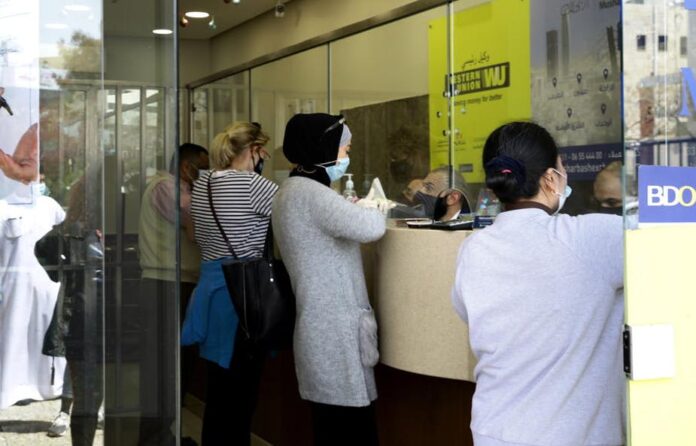 Remittance flows around the world are set to fall more than $100 billion this year, depleting a vital source of financing for developing countries as they struggle with the economic chaos triggered by the coronavirus pandemic, the World Bank said in its report on Wednesday.
The impact of the global lockdown, which has led to steep job losses across the world as economies closed, would cause a 20 per cent decline in remittance flows to low and middle-income nations compared with last year, from a record $554bn to $445bn.
It would be the largest fall in recent history, and those most vulnerable to the decline include fragile states such as Somalia, Haiti and South Sudan, and small island nations such as Tonga, with remittances accounting for more than a third of gross domestic product in some. Larger countries including India, Pakistan, Egypt, Nigeria, and the Philippines will also be hit as remittances have become a crucial source of external financing for them.
Dilip Ratha, the World Bank’s lead economist for migration and remittances, told the Financial Times that the fall would be a “major financial shock” to countries that depend on remittances.
“If we are expecting a fall of 20 per cent it’s going to be a huge shock, it’s going to cause a lot of hardship for countries in terms of macroeconomic management and balance of payments difficulties,” Mr Ratha said. “But more important is the human story . . . The number of people who are going to be impacted — both for the migrants in host countries and families back home it’s going to be huge.”
Last year, remittances overtook foreign direct investment to become the biggest source of capital inflows to low and middle-income countries for the first time; they accounted for about 8.9 per cent of GDP in poorer countries in 2019.
The World Bank estimates that in 2019 there were 272m international migrants — including 26m refugees — and more than 700m internal migrants around the world providing financial support to dependants elsewhere. But foreign workers are often the first to lose their jobs in times of crisis.
As global travel has been frozen, many are now in limbo, neither able to work nor to return to their home countries.
Some governments have introduced measures to support business to ensure they continue paying workers. But the World Bank said: “So far, government policy responses to the Covid-19 crisis have largely excluded migrants and their families back home.”
There have also been allegations that some Gulf states, including Saudi Arabia and Qatar, have deported migrants during the crisis. Saudi officials deny they have forcibly repatriated workers and said Riyadh was co-operating with governments if migrants wanted to return. Doha said those it deported were involved in “illegal activities” and insisted it was adhering to international standards in its treatment of workers.
Lockdowns have also made it harder for migrants to send money back to their families as money-transfer offices have been forced to close; many poorer migrants do not have bank accounts and are not able to conduct online money transfers.
Mr Ratha said that remittance service providers should be considered essential services during the coronavirus pandemic. The bank warned that for migrant workers, the economic crisis triggered by the outbreak could be “long, deep and pervasive”.
“Migrants will lose jobs disproportionately more,” Mr Ratha said. “When the economy recovers, because migrants are more flexible with their terms [of employment], they will try to bounce back. But there will be policy-induced restrictions on hiring people for a long time to come. So it will take some time for migrant employment to recover.”
Remittances to Europe and central Asia are expected to fall the most, dropping about 28 per cent this year because of the economic effects of Covid-19 and the collapse in oil prices, which will hit Russia and cause the rouble to weaken. Flows to sub-Saharan Africa are forecast to fall 23.1 per cent.
The oil price crash will also hit remittances from the Gulf states, such as Saudi Arabia and the United Arab Emirates, as governments are expected to slash state spending — the primary driver of economic activity — and delay or halt projects. The Gulf is one of the biggest exporters of remittances, as foreign workers dominate private sector employment.
Despite their projected decline, remittances will become an even more critical source of external financing for countries this year as foreign direct investment is expected to plunge more than 35 per cent and portfolio flows to low and middle-income countries’ equity and debt markets are forecast to decline about 80pc, the World Bank said.
The global lender predicted a slight recovery in remittances in 2021, with flows to lower and middle-income countries set to rise 5.6 per cent to $470bn.
- Advertisement -
Facebook
Twitter
Linkedin
WhatsApp
Email
Previous articleBanks advised to suspend dividends for March and June quarters
Next articleState bank, govt working together to shield economy: Reza Baqir