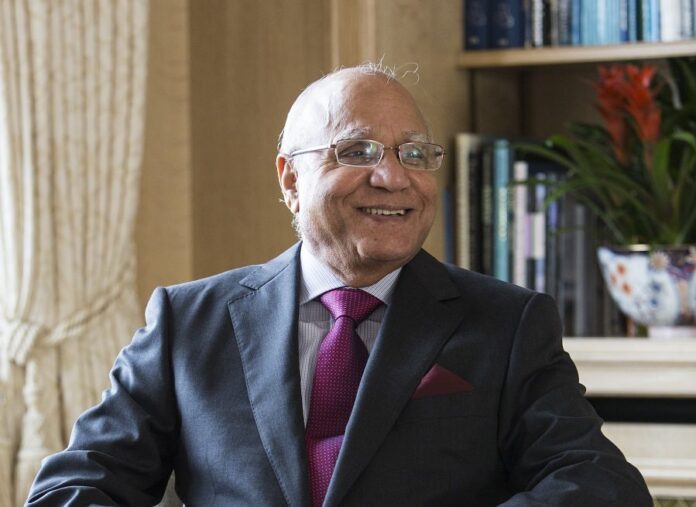 LONDON: Pakistani-origin British billionaire Sir Anwar Pervez, who founded the Bestway Group, slid to the 50th spot from his previous 42 on the Sunday Times Rich List 2020 after accruing losses of £432 million amid the coronavirus pandemic, it emerged on Sunday.

Sir Anwar, who was knighted by the Queen in 1999, left his hometown of Rawalpindi in the 1950s for the UK where he landed a job as a bus conductor.

After working as a bus conductor and driver for about five years, Sir Anwar said he started to save money to bring his relatives to England. One by one, his family members arrived here in the early 60s, and their incomes together made it possible to dream of a business. In 1963, he opened a retail store in Earl’s Court, a specialist store which sold masala and halal meat.

Later, he delved into the business of the cash and carry stores that today, under the group’s wholesale banner, are worth billions of pounds.

Britain’s wealthiest people have lost tens of billions of pounds in the coronavirus pandemic as their combined annual wealth fell for the first time in a decade, according to the Sunday Times report.

The newspaper, which has produced the respected annual ranking of the country’s 1,000 wealthiest people since 1989, found the past two months had resulted in the super-rich losing £54 billion ($65bn, 60bn euros).

More than half of the billionaires in Britain had seen drops in their worth by as much as £6bn, a decrease in their collective wealth unprecedented since 2009 and the financial crisis.

Inventor James Dyson bucked the trend to top the list for the first time, with an estimated wealth of £16.2bn.

The paper credited his rise from fifth place in 2019 to both the strong performance of his businesses and the plummeting fortunes of other billionaires in the top 10.

The Hinduja brothers, who topped last year’s list with a £22bn fortune, saw among the biggest falls in worth — £6bn — and are now ranked jointly second with entrepreneurs David and Simon Reuben.

Jim Ratcliffe, boss of petrochemicals firm Ineos, who topped the rankings in 2018, also saw his worth slide by £6bn to £12.15bn.

Steel baron Lakshmi Mittal was another to see the steepest falls in his fortune — nearly £4bn — placing him 19th with a worth of £6.78bn.

In total, the 2020 list calculated the combined wealth of Britain’s super-rich to be £743bn — £29bn less than last year.

Billionaire capital of the world

Its number of billionaires dropped by four to 147 but London remains the billionaire capital of the world, with 89 born, living or with a significant chunk of their assets based in the city.

“The first detailed analysis of the super-rich’s finances since the Covid-19 outbreak began will heighten concerns that Britain is entering a deep and long-lasting recession,” the Sunday Times said.

The paper noted at least 63 members of the list, including 20 billionaires, have sought to use a government-run furlough scheme which pays staff up to 80 per cent of their salaries up to £2,500 a month during the crisis.

They include London-based Sri and Gopi Hinduja, owners of the sprawling Hinduja Group of companies, who have furloughed around 360 employees at Optare, their bus-making firm based in northern England.

Ratcliffe co-owns The Pig hotel chain, which has furloughed most of its staff, while he is also seeking an emergency loan from the government for a joint venture between Ineos and the Chinese state-owned PetroChina.

Carys Roberts, executive director of the Institute for Public Policy Research, told the Sunday Times their use of the taxpayer-funded schemes was highly questionable.

“Why can’t they now dip into their own deep pockets instead of asking ordinary families to do so for them?” she said.