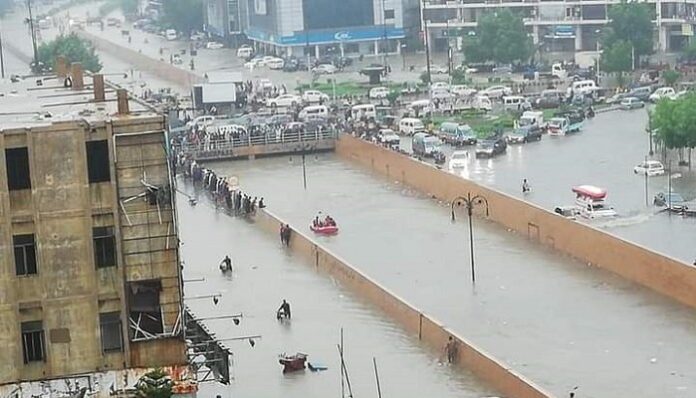 Karachi: The disastrous spell of rains that have left Karachi parlayed and flooded, with the Sindh government declaring a public holiday on account of the situation, is costing Pakistan approximately $449 million everyday that the city remains out of commission.

As of 2019, Karachi had an estimated nominal Gross Domestic Output (GDP) of $164 billion which makes the city’s daily GDP approximately $449 million. The economic standstill that has come as a result of the rains is thus costing Pakistan this much money everyday that it stands at a halt. This cost does not even include the cost of destruction to public and private property, not to mention the immeasurable cost of human lives.

On Thursday, businesses were forced to close sooner as roads were flooded with water and the electricity supply remained unreliable. Later on in the evening, K Electric decided to turn off power for a significant majority of Karachi as a preventative measure. Electricity has still not been restored to many areas as of the filing of this report.

The Pakistan Stock Exchange (PSX) building also saw water accumulate in its premises.
Considering the deadly impact of the rain and the difficulty commuting to work. The calculation of a loss of Rs 449 million in this situation is a conservative estimate, especially since it has not accounted for the substantial informal economy.

Other than this, there has also been the cost of the inventory loss that businesses have incurred. Speaking to Profit, a furniture showroom owner at Nursery Shahrah-e-Faisal disclosed that inventory worth more than Rs 1 million had been destroyed by water entering into his shop alone. He also adds that it is now difficult for him to meet orders for furniture placed before the urban flooding.

A factory owner in North Karachi Industrial Area, one of the twelve industrial areas in Karachi, commented that due to water accumulation on the streets eventually reaching indoors, his machinery has been damaged. He adds that he does not know when he can begin operations again because his priority now lies with the safety of his staff.

Profit also reached out to the Public Relations teams at various banks, but contact could not be established. However, informal sources state that it is difficult to determine how many banks were operational today, and how many ATMs are running. This is based on the fact that not only are signals and internet connectivity disturbed in the provincial capital, but also due to the fact that a number of individuals are stranded in their homes, at work, or until yesterday, on roads.

Business owners have been complaining about how the infrastructural weaknesses in Karachi have resulted in greater difficulty to run a business.

While there remains uncertainty regarding the accurate cost of the city shutting down after experiencing strong rain and urban flooding, what is certain is that the situation results in a loss to the national GDP. There is another spell of rain expected this week, which may result in more days of commercial activity at a standstill.