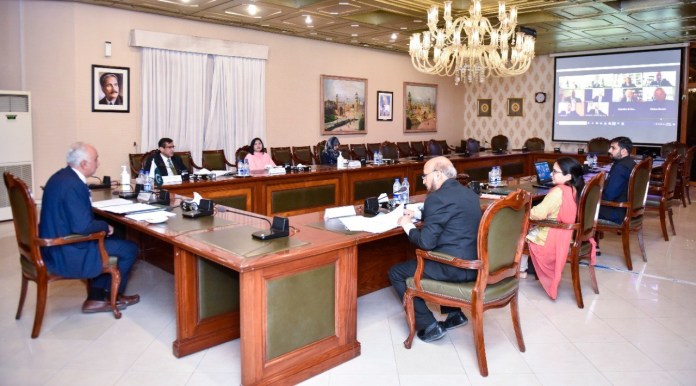 ISLAMABAD: Pakistan and Argentina have agreed to expand bilateral trade by increasing the level of interaction at multiple levels.

Both countries held the fourth round of bilateral political consultations via video link and discussed a wide range of bilateral, regional and multilateral matters of mutual interest, said a statement issued on Friday.

Speaking on the occasion, the additional secretary underscored that ever since the establishment of diplomatic relations between Pakistan and Argentina in October 1951, the two countries have enjoyed a cordial relationship based on mutual respect and understanding.

He underlined the need to mark the completion of 70 years of diplomatic relations between the two countries in a befitting manner.

The additional secretary emphasized the importance of expanding the scope of bilateral trade between Pakistan and Argentina by increasing interaction at multiple levels and by holding a virtual meeting of the Joint Trade Committee in the first quarter of 2021.

He also expressed the desire to reactivate Pakistan’s Antarctic Programme, as the country intended to undertake more research expeditions to Antarctica with the collaboration of Argentina.

He highlighted the plight of the people of the Indian Illegally Occupied Jammu & Kashmir (IIOJK) and underlined that “India continues to unleash a reign of terror in the IIOJK even during the challenging times of the Covid-19 pandemic”.

The exchange of views also covered the impact of Covid-19 on the national and global economy and measures to mitigate the effects of the pandemic on the lives of the common people.

The additional secretary reiterated the offer extended by the Drug Regulatory Authority of Pakistan (DRAP) to export locally-produced ventilators to Argentina.

The prime minister’s ‘Global Initiative on Debt Relief’ for developing countries and cooperation in the fields of climate change, sports, culture and people-to-people contacts through visa facilitation also came under discussion.

Tirmizi highlighted the importance of parliamentary exchanges between the two countries and mutual cooperation in such fora as the IPU.

The two sides also took stock of the under-process bilateral agreements and MOUs.

A memorandum of understanding on cooperation in the field of sanitary and phyto-sanitary issues related to bilateral trade between the Ministry of National Food Security and Research of Pakistan and the Ministry of Agriculture, Livestock and Fisheries of the Argentine Republic was signed in Buenos Aires by the Ambassador of Pakistan in Argentina and the Minister for Agriculture Livestock and Fisheries of Argentina.

The additional secretary, on behalf of Foreign Minister Shah Mahmood Qureshi, extended an invitation to the foreign minister of Argentina to visit Pakistan at a mutually convenient date.