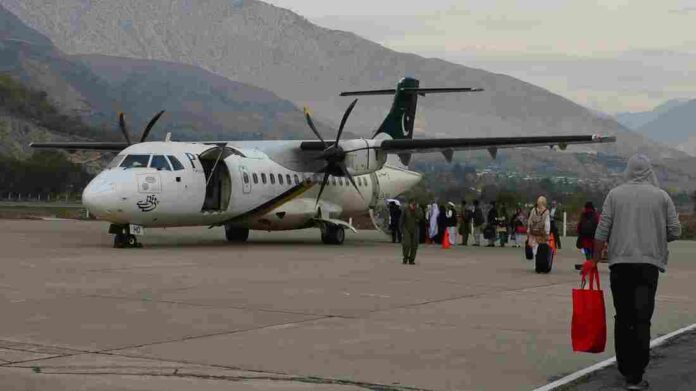 SWAT: Flight operations at the Saidu Sharif Airport resumed on Friday after a gap of 17 years.

The restoration of flights to Swat was aimed at boosting tourism in the scenic valley, with two flights operating from Islamabad every week. The operation will connect with flights from Karachi and Lahore.

Following the flight’s arrival, a ceremony, presided over by the KP CM, was held at the airport. Public office holders in the district were also in attendance.

Talking to the media on the occasion, Mahmood Khan termed the regularisation of flights after a span of 17 years a significant milestone.

He thanked Prime Minister Imran Khan for restoring the flights that had been irregular for the past 17 years. He also praised Murad Saeed, civil aviation authority, PIA, and the district administration for their efforts to restore the flights.

The chief minister felicitated the people of Malakand in general and Swat in particular on the important development. He hoped that the regularisation would help uplift tourism and employment opportunities in the once terror-hit valley.

Mahmood Khan said the incumbent government was paying special attention to boost tourism. “Efforts are underway to identify new tourism sites and to revamp them at par with international standards. Work is also ongoing to establish various integrated tourism zones in the province,” he maintained.

The chief minister said that all tourism sites in KP are being connected to one another by road, adding that a skiing village comprising 4,000 homes is being constructed in the province with the assistance of an Austrian company, while work is also underway on a chair-lift facility in Kumrat.

Earlier, while speaking to media during the flight’s departure, the aviation minister said flights to the city were earlier closed due to financial constraints and terrorism, adding that the people of Swat and Malakand bravely fought back terrorism alongside security forces.

Sarwar termed the flights an important development at the present time, saying they will be increased over time. The flights, he maintained, will not just add to the national exchequer but also boost tourism in Pakistan. Swat will also witness development as a result, he said.

It may be noted that the airport was opened for domestic flight operations in 1978.
According to Alhaj Zahid Khan, president of Swat Hotels Association, the airport will have a far-reaching effect on Swat’s economy, as its closure had wreaked havoc in the tourism industry.
Meanwhile, Rehmat Ali, an elderly taxi driver from Swat district, told Profit that three decades ago, local transporters were earning more from tourists coming here through the airport, but when terrorism engulfed Swat, millions of people lost their jobs in the tourism sector.
He said that the reopening of the airport is welcome development as it will not only facilitate tourists but will also resume employment of millions of people associated with the hotel industry.
- Advertisement -
Facebook
Twitter
Linkedin
WhatsApp
Email
Previous articleWB to provide $1.3bn for Pakistan’s social sector development
Next articleCRBC stresses aggressive marketing strategy for Rashakai SEZ