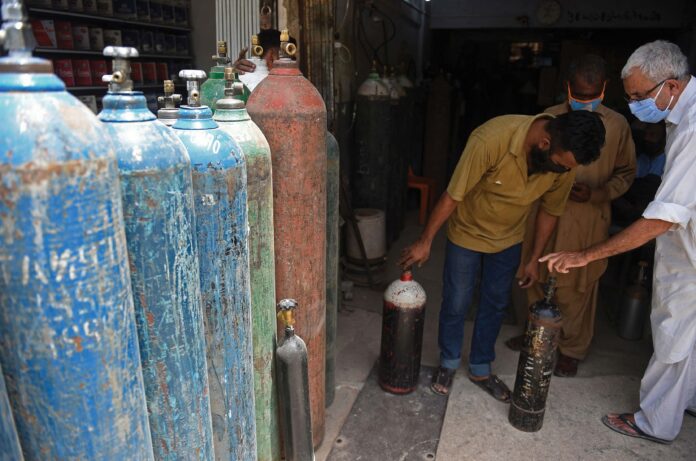 ISLAMABAD: The federal government has put a price cap of Rs12,900 on a filled oxygen cylinder for retail sale.

Documents state that the Ministry of Industries and Production has fixed the maximum retail price of oxygen cylinders with different cylinder capacities.

The consumer has to pay Rs400, Rs960 and Rs1100 extra if they want to refill the above-mentioned different capacity cylinders.

Documents state that the ministry of I&P carried out a market survey of prices of oxygen gas and cylinders.

The document states that the ministry of I&P has directed the provincials as well as ICT administration to implement this order under the powers delegated to them by SRO F.No1(7)/2005-CA, Vol-III dated 14th September 2006 and to take action against the producers, dealers, distributors and retailers who do not comply with this order, as provided under the Price Control and Prevention of Profiteering and Hoarding Act, 1977.

However, provinces and federal regions may add an allowance to the notified prices for extra transportation costs in remote or distant areas, the document added.

Further, a weekly compliance report shall be submitted by authorities exercising the delegated powers of Controller General of Prices in the provincial and federal regions. This order shall come into force immediately and shall be given wide publicity through a notification in the official gazette.

This order will remain in force till October 15 unless rescinded or modified earlier.

The concerned producers, dealers or importers of oxygen cylinders are hereby given an opportunity to offer their views along with the submission of relevant documents, data and information by September 15 in terms of para 5(4) of the Price Control and Prevention of Profiteering and Hoarding Order 2021.