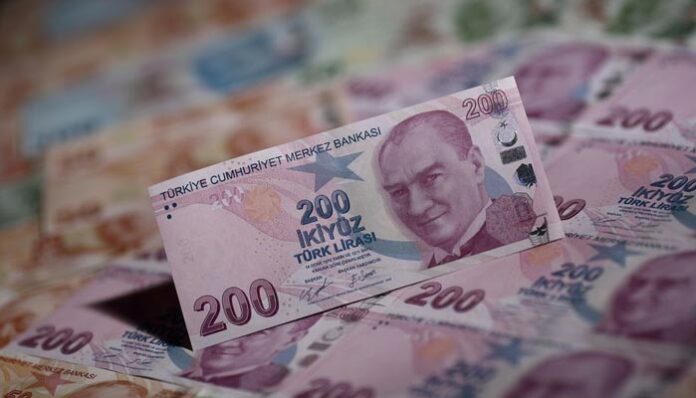 ANKARA: Turkey’s lira was on track for its strongest week on record on Friday, having spiked more than 50% with the support of billions of dollars of state-backed market interventions and a promise that the government would cover FX losses on certain deposits.

Turks did not sell dollars on Monday and Tuesday, according to official data that suggested they had played little role in the sharpest market gains. The state interventions, meanwhile, cost the central bank more than $8 billion this week, according to traders’ calculations.

After four red-hot days, the lira cooled 3% to 11.8 versus the dollar.

The currency had plunged on Monday to an all-time low of 18.4 per dollar, after a months-long slide due to unorthodox interest rate cuts and fears of an inflationary spiral.

But late on Monday President Tayyip Erdogan unveiled a scheme in which the Treasury and central bank would reimburse losses on converted lira deposits against foreign currencies, sparking the biggest intraday rally ever.

The anti-dollarisation plan prompted Turks to convert some $900 million worth of hard currencies into lira, according to Finance Minister Nureddin Nebati.

But data from the BDDK banking watchdog showed that, after heavy accumulation of dollars last week, Turkish individual depositors held $163.7 billion of hard currencies on Tuesday — virtually unchanged from Monday and Friday, when the total was $163.8 billion.

The lira instead got a big boost from what traders and economists called backdoor dollar sales by state banks, supported by the central bank.

In the first three days of the week alone, the central bank’s net foreign reserves dropped by $8.5 billion, according to the calculations of three bankers who spoke to Reuters. The drop totalled nearly $18 billion in December, they said.

“We suspect positioning and stealth intervention will continue to dominate the price action,” said Win Thin at Brown Brothers Harriman. “Even if the lira stabilizes, there are still strong inflationary impulses in the economy that will continue to erode the value of any local currency holdings.”

Citing four sources familiar with the operations, including a senior Turkish official, Reuters reported on Thursday that state banks heavily sold dollars earlier this week on the heels of Erdogan’s announcement.

The state banks have not commented on the issue.

The central bank, which was not immediately available for comment, had announced dollar-selling market interventions earlier this month but not this week.

Nebati, discussing interventions on broadcaster NTV on Thursday, said Turkey is “using all the instruments at its disposal in a positive way”.

As of December 17, the central bank’s net foreign reserves tumbled to $12.2 billion from $21.2 billion a week earlier, to levels last hit in May in a reflection of the interventions.

Hakan Kara, former chief economist at Turkey’s central bank, said on Twitter the bank’s FX sales amount to $17-20 billion this month, including $3 billion on Wednesday alone, though he said it was unclear specifically how they were used.

“State banks provided significant support to the forex balance but it’s not only state banks that are selling dollars,” said a bank trader who requested anonymity.

In 2019-2020, the central bank backed, via swaps, the sale of some $128 billion via state banks to stabilise the lira, depleting Turkey’s foreign reserves and drawing sharp criticism from the political opposition.

Under pressure from Erdogan, the central bank has slashed its policy rates by 500 basis points to 14% since September despite a jump above 21% in inflation. Price rises are set to blow through 30% next year in part due to the lira depreciation.

Reflecting these concerns, Turkish Airlines will raise employee pay by the rate of inflation plus 65% for 2022, according to an agreement with its labour union.