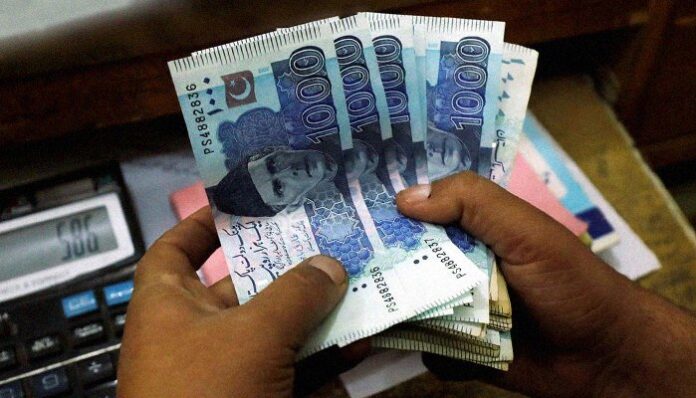 The Pakistani rupee depreciated by 36 paisas (-0.20 percent) against the US dollar for the third straight session on Monday as commodity prices surged globally on the back of the Russia-Ukraine conflict.

Overall, the rupee shed Rs1.25 against the dollar last week, while depreciation remained 75 paisas in February. The local currency devalued by Rs20.04 during the ongoing fiscal year 2021-22 and 96 paisas during the current year 2022.

Further, the rupee is bearing the brunt of increasing trade deficit, surging import bill due to rise in oil prices, shrinking reserves, and speculative elements.

The oil import bill recorded a sharp increase in the first seven months (July-January) of 2021-22 compared to the same period last year, owing to rising prices on the international market and massive depreciation of the rupee.

The oil import bill rose by 107.35 percent to $11.7 billion in the first seven months of the current fiscal year. Moreover, the decline in the value of PKR is also attributable to the deteriorating current account balance owing to the increase in imports as the current account deficit (CAD) rose to $2.6 billion in January 2022 from $1.9bn in December 2021.

ISLAMABAD: The government on Thursday announced an increase of Rs14.85 per liter in the price of petrol effective from July 1, 2022. “In view of...
Read more
HEADLINES

LAHORE: The Pakistan Sugar Mills Association (PSMA) on Thursday rejected the Commerce Ministry’s statement that said that the country does not have sufficient amount...
Read more
- Advertisement -