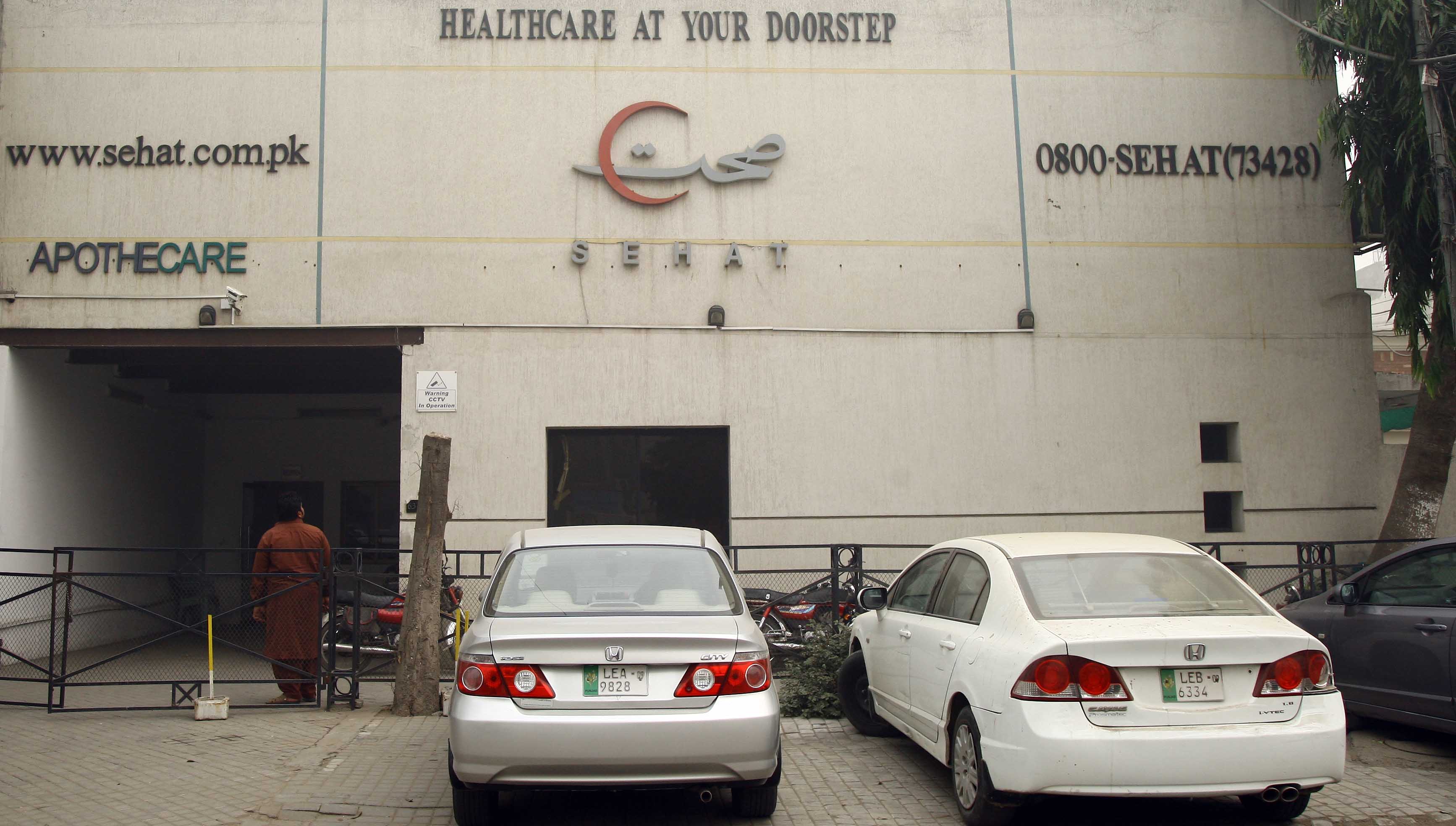 Shortly after Pakistan’s independence, Haji Sheikh Fazal Din established his first retail pharmacy on the famous and historically significant Mall Road in Lahore. Since 1948 Fazal Din and Sons (Pvt.) Ltd. has remained a household name because of being an integral part of the healthcare industry.

Today the fourth generation of the family is running the business which has now expanded to more than 300 cities across the country and includes several strategic business units.

One such venture of the group is Apothecare (Pvt.) Ltd.

A mathematician and economist by education, and an investment banker by profession, Nadir has successfully launched three companies. Sehat was launched in 2014 after the company carried out a formal market survey to analyze the practicality of introducing an online pharmacy in Pakistan.

In April the same year, the online channel of Sehat was officially launched. Currently, it is supplying prescription medicines and consumer products along with implants and other surgical equipment.

Nadir Mumtaz and Marketing Head Apothecare, Bilal Mumtaz believe that Sehat is continuing the tradition of Fazal Din, as innovators in Pakistan’s pharmaceutical industry. Sharing insights about their project, Nadir says that Sehat is the first of its kind channel. “Fazal Din introduced endoscopy, laparoscopy and several other operations in Pakistan. The software employed at the moment by pharmacies throughout Lahore for record keeping was also Fazal Din’s contribution,” claims Nadir.

Being the first online pharmacy Sehat has and still is reaping certain advantages. Even though many similar platforms have sprung up since its launch, Sehat is still the biggest player in the country. It is offering services to 320 cities in Pakistan and has already supplied to consumers in more than 190 cities.

Since its launch two years ago, Sehat has shown tremendous growth. Becoming a major player in its first year of operations, it continued to grow by almost 150 per cent in its second year. Currently, it receives approximately 300 orders per week.

“There is such a huge market that there is virtually no competition. And if there are more competitors that would only mean that more customers are directed towards online pharmacies” Nadir Mumtaz CEO of Apothecare

However, Sehat does not have much room to manoeuvre in terms of profit. Nadir says with price of medicines being fixed by the government, it puts a ceiling on the profit margins. “There is a 15 per cent margin on the cost price and that is the maximum we can get, like any other pharmaceutical company.” He says the only way to increase revenues, and thus profitability, was to increase sales. For Sehat the majority of its revenues come from individual customers. “When corporations buy, they obviously order in larger quantities, but overall it’s the individual customers that make up for majority of our revenues,” explains Nadir.

For the distribution of medicines across the country, Sehat has partnered with TCS and Leopard courier services. They also had OCS and RoadRunner on board, starting their business with the latter, but dropped them due to higher costs. Sehat has also offered options for payments through Habib Bank Limited (HBL), Bank Alfalah, Allied Bank (ABL), and Standard Chartered, as well as through Easy Paisa, Jazz Cash, Visa cards and Master Cards.

“Our primary goal is to facilitate the customers. We also provide them with cash on delivery options in remote areas,” he adds. Elaborating further, he says that Sehat also offers regular ordering facility. “If someone has to take some medication continuously, they can use this option and register with us once” says Nadir. After that, every month or after a period specified by the customers, their medicines are delivered without them having to order again and again.

To ensure that there are no underage sales, and to avoid drug-seeking behaviour, Sehat has made the provision of prescription necessary for all medicinal drugs. “Customers can send us their prescriptions on Whatsapp or through email. We have a trained team here to verify the authenticity of those prescriptions before issuing medicines.” The entire system is automated but there are 45 people employed in the company who are responsible for ensuring proper operations, orders and sales through this online platform.

One of the challenges for any pharmacy is advertising. The pharmaceutical industry is highly regulated worldwide and there are legal limits for its advertisements. Nadir says that they have to be cautious in choosing the products to advertise as well as the means of advertising. “We cannot say nor do everything we want. Not only in Pakistan but all around the world pharmaceuticals face this issue.” Citing an example, Nadir says that Google was fined two billion dollars by US Food and Drug Administration (FDA) for advertising non-FDA approved drugs of a Canadian pharmacy.

Nadir says that not only pharmaceuticals but even advertisement agencies are also wary of advertising medicines. “We use radio and social media to advertise our online channel, but we have not yet used a TV commercial.” Though Bilal says that there might be a TVC on the cards, but there are no plans to use it for marketing any time soon.

The website is operable on smart phones, but there is no mobile application launched as yet. In their advertisements, Sehat does not highlight or favour any particular brand of medicine or manufacturer. “Sometimes some brands do offer discounts and we pass them on to customers. But we ourselves do not promote any brand.” Other than suggesting alternatives for cases when a particular medicine is unavailable or short in market, there is no part played by Sehat in sales of any particular type or brand of medicine.

According to Nadir, the pharmaceutical industry in Pakistan is nearly worth $2.2 billion and the e-commerce business for medicines is barely worth $100 million to $120 million

According to Nadir, the pharmaceutical industry in Pakistan is nearly worth $2.2 billion and the e-commerce business for medicines is barely worth $100 million to $120 million. He says that despite being one of the biggest online platforms, Sehat’s market share is minimal. “There is such a huge market that there is virtually no competition. And if there are more competitors that would only mean that more customers are directed towards online pharmacies. The entire market will grow and competition will still be minimal.”

Sehat has around 300 companies in Pakistan as their suppliers for medicines and are partners with 70 of them. They keep their own stock but have reliable suppliers to back on. Despite having an entirely IT based system, and a range of suppliers, Sehat has to go through certain challenges. “A couple of years back there was a severe shortage of a vaccine for children. We already knew that it would happen because GlaxoSmithKline plc (GSK) shifted one of its manufacturing plants from Belgium to France, and Pakistan had not registered with them for the medicine,” recalls Nadir. While Sehat stocked the vaccine as much as it could, there was still a shortage. Nadir believes that such incidents are preventable but at the government level, with individual companies or pharmacies only being able to predict and not prevent such incidents.

To ensure that there are no underage sales, and to avoid drug-seeking behaviour, Sehat has made the provision of prescription necessary for all medicinal drugs

There have also been instances of unhappy customers, but the company had managed to stay clear of litigation and any legal ramifications. “We do our best to ensure that no wrong medicine is given. We also ask to our clients regarding their allergies to any medicine. But no matter what you do there are always some complaints.”

Sehat also offers consumer products, but it continues to operate primarily as a medicinal platform. For the company’s future plans, Nadir says that they will grow as and when opportunities come. “We are expanding our supply to the remotest areas. Our aim is to make buying medicines convenient and easy for as many people as we can.”